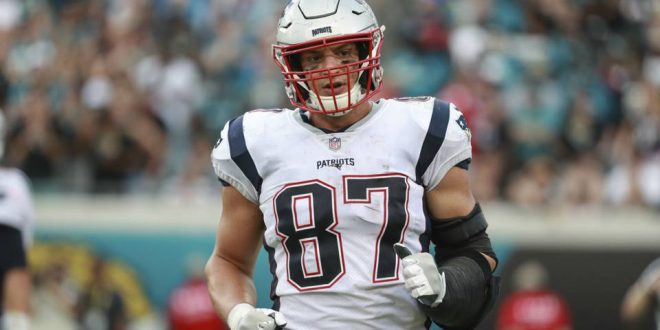 Rob Gronkowski, who is considered by many as the greatest tight end of all time, recently announced his retirement from football. Even though he was in the NFL for under a decade, it is evident that he is on the Mount Rushmore of tight ends.

I will be retiring from the game of football today. I am so grateful for the opportunity that Mr. Kraft and Coach Belichick gave to me when drafting my silliness in 2010. My life experiences, relationships and championships over the last 9 years have been amazing! pic.twitter.com/DAMM9wMVxb

Gronkowski is a 3-time Super Bowl champion and has the most touchdowns in the NFL since 2010 with 79.

Over 9 seasons, he played in 115 regular season games. He grabbed 521 receptions for 7,861 yards. Gronkowski also appeared in 16 playoff games and totaled 81 catches, 1,163 yards and 12 touchdowns. These playoff statistics are all records for a tight end.

He is the only tight end in NFL history to post three seasons of over 1,000 years and ten or more touchdowns.

He is also the only tight end in NFL history to post three straight ten touchdown seasons.

Even though he has had a plethora of success playing for the New England Patriots and Tom Brady, his career was negatively impacted by injuries.

Some of these injuries include a torn ACL/MCL, three back surgeries, multiple concussions, hamstring and groin issues, multiple broken forearms and ankle issues.

After all of these injuries, Gronkowski was only a shell of his former self. He struggled to run and ultimately looked like a player who was much older than his current age of 29.

However, he was still able to make incredible plays in clutch situations.

The last catch of Gronk’s career. Went out how he came in: completely uncoverable pic.twitter.com/bH3Mxp74Mq

The game will never be the same without the passion and fire of Rob Gronkowski.

However, it seems like Gronkowski’s retirement is not certain. According to his agent, Drew Rosenhaus, “He’s still a very young man. It wouldn’t shock me if he has a change of heart, if he feels great and he decides that he wants to play football.”

For now, everyone is expecting to see the New England Patriots without Gronkowski next year. As we’ve seen with Jason Witten coming out of retirement to play for the Dallas Cowboys, anything can happen.