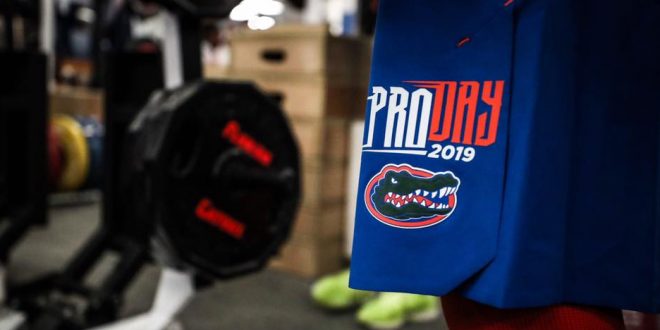 Today, 17 Florida Gator football players from the 2018 roster participated in the 2019 Gators Pro Day. Today’s events were supposed to take place in Ben Hill Griffin Stadium, but due to bad weather overnight and field conditions, it was moved to the Gators Indoor Practice Facility.

All 32 NFL teams were represented today at UF’s Pro Bowl. Here’s a list of Gators they were scouting:

In addition to these 17 players, a couple former Gators participated as well.

The next round of Pro Day took place in the Indoor Practice Facility with four different stations. They stations were the broad jump, the 40-yard dash, the pro shuttle L-drill, and the 60-yard shuttle.

Biggest Takeaways of the Day

While Jachai Polite was at the NFL Combine last month, he didn’t leave the best impression on NFL representatives and scouts. Today, at Pro Day, he owned up to that and said he changed.

Looking ahead, Polite wants coaches to know that he is better than that and is someone they can trust.

At Pro Day today, Polite mentioned that his hamstring was still hurting, but he felt good enough to compete.

Jawaan Taylor is heading into this year’s NFL Draft as a top-ten pick. With that said, Taylor told reporters today that he has worked very hard to get to where he is today and it definitely shows.

Taylor said has no regrets foregoing his senior season for the draft.

He came into this offseason with high expectations for himself and tries to reach his goals every day.

Sydney is a senior studying telecommunications with a specialization in sports media at the University of Florida. She is a multimedia sports reporter for ESPN 98.1 FM/850 AM WRUF and WUFT-TV.
Previous Former Gator Al Horford Helps Lead Celtics
Next Ballard, Okauru and Stone Enter Transfer Portal