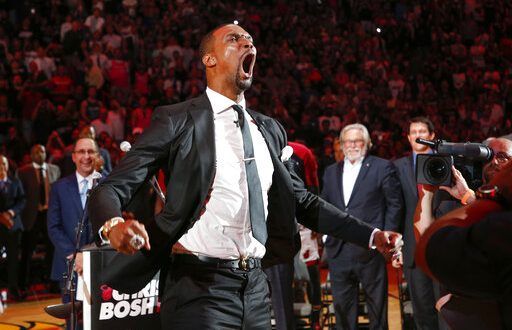 Former Miami Heat player Chris Bosh reacts at the team's retirement of his jersey at halftime of an NBA game between the Heat and the Orlando Magic, Tuesday, March 26, 2019, in Miami. At right is Heat owner Micky Arison. Bosh played 13 seasons, the first seven in Toronto and the last six in Miami. He averaged 19.2 points and 8.5 rebounds, was an All-Star 11 times and won two championships.(AP Photo/Joe Skipper)

On a night that Chris Bosh’s No. 1 jersey was hung into the rafters of the AmericanAirlines Arena, it was the Orlando Magic that hung a pivotal home loss on the Miami Heat.

With eight games remaining in their 2018-2019 regular season, the Heat have once again fallen outside the playoff picture in the Eastern Conference.

Following a road win against Washington last Saturday, the Heat (36-38) fell to the Magic 104-99 at the AAA. Miami’s latest loss vaults the Magic (37-38) into eighth place in the East.

Steve Clifford’s team has now won six consecutive games. Of Orlando’s final seven games of the season, four will come against teams with a record of .500 or better. Miami has five such games remaining.

While the 7-10 seeds in the conference are still separated by just two games, it’s almost like the Magic are now in more control of their own destiny. They still have to play both the No. 7 seed Detroit and the No. 10 seed Charlotte on the road. Those games will undoubtedly be tough, but only the LA Clippers have a current win streak equal to Orlando’s.

The Magic must also prepare for visits to the upper echelon of the East. They’ll play on the road in Boston, Toronto and Indiana. Meanwhile, the Heat must travel to play the same Celtics, the Raptors and the No. 6 seed Brooklyn Nets. Other notable games for Miami include home bouts against the Philadelphia 76ers and the Celtics two days after their first aforementioned matchup.

Whatever Clifford said to his team at halftime did the trick. Orlando trailed Miami by nine at halftime, but they erased that deficit via a 21-8 run with six minutes remaining in the 3rd quarter. The entire game was a back-and-fourth affair only separated by fine margins.

Orlando held the Heat to 30 percent (10 for 33) from 3-point range. Comparatively, they shot 33 percent (14 for 42). The Magic also benefited from a nine rebound advantage over the Heat. Unsurprisingly, all-star C Nikola Vučević collected a double-double (26 points, 16 rebounds). That ties him for second most in the Eastern Conference with 55 behind only C Andre Drummond.

Point guard Goran Dragic had just two points in 26 minutes. Forward Kelly Olynyk shot 1 for 7 from the field including 0 for 5 from beyond the 3-point arc. Erik Spoelstra got solid performances from both his guards, Dwayne Wade (22 points, 7 rebounds, 7 assists) and Dion Waiters (26 points), yet both of them also missed a number of long jumpers late in the fourth quarter.

On the other end, the Heat had no answer for the combination of Vučević and Augustin.

The duo scored 14 of Orlando’s last 16 points to close out the ballgame. As he’s done for certain match ups this season, Spoelstra decided to give more minutes late in the game (30 total) to C Bam Adebayo while Hassan Whiteside scored 10 points in just 15 minutes of action.

The Eastern Conference’s race for the playoffs may just come down to the wire.

Miami will prepare for another home game against the Dallas Mavericks Thursday at 7:30 p.m. ET. Orlando continues their road trip with a stop in Detroit for a 7 p.m. tip-off.

Essentially, Tuesday night saw a Miami Heat legend be rightfully celebrated and honored, but now it also might put the Heat in serious danger of missing the playoffs in another one of their franchise legend’s final season.

We honor and celebrate your Miami HEAT career, @chrisbosh!