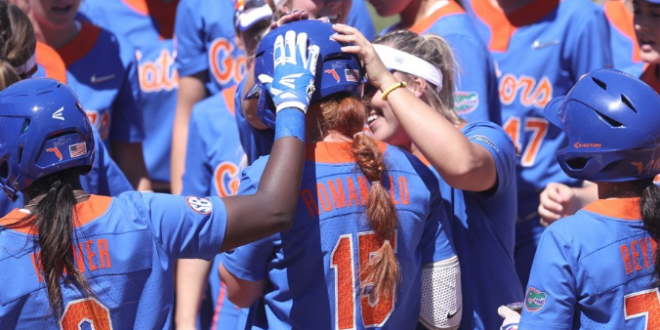 Put the Ball in Play

Florida was able to capitalize off several mistakes made by Wildcat fielders. Five different Bethune-Cookman fielders committed six errors leading to eight unearned runs against them.

Every Gator starter came around to score at least once including two runs from each of Florida’s top three hitters in Jade Caraway, Hannah Adams and Amanda Lorenz.

Lorenz on capitalizing off BC mistakes:

Florida hitters seemed to jump at every pitch by Wildcat pitchers Alexis Bermudez and Destiny Enriquez. It enabled them to extend at-bats that led to either hits or errors. The two pitchers combined for 141 total pitches in just five innings compared to Florida’s 75.

Walton on Florida against BC pitching:

Junior Jade Caraway continued her torrid stretch from the lead off spot. She went 2-for-3 with one RBI and two runs scored. The NC State transfer is now batting .500 (5-for-10) over her last three games.

“I think I’ve really just slowed down and not tried to do too much,” Caraway said. “I feel like I kind of was before. I’m just really understanding my role of I don’t have to do that much, I just need to get on base and however I get there is OK.”

Caraway wasn’t the only one to be given an opportunity as 17 different Gators took hacks at the plate Wednesday evening. For Walton, it wasn’t because he was looking ahead to the end of the season.

Florida is back on the road this weekend to take the Ole Miss Rebels and their pitching staff that leads the conference in earned run average. All of those games can be streamed on SEC Network+.