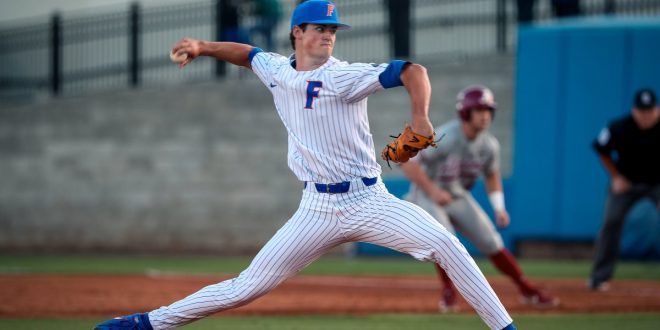 Mace on the Mound

The story of the game was Mace, who threw his first complete game as a Gator starting pitcher.  He allowed just the one run on three hits while recording seven strikeouts.

Furthermore, Florida was able to avoid using their bullpen giving head coach Kevin O’Sullivan more options heading into the rest of the series. Pitchers Nolan Crisp, Christian Scott, and Jordan Butler will be available for the Gators heading into Games 2 and 3 of the series.

Additionally, Mace’s performance at the mound was complimented by impressive defensive plays; the Gators made no errors in the game.

Mace commented on the impressive performance by his defense.

Florida got off to a quick start at the plate, going up 1-0 in the first inning. Nelson Maldonado recorded an RBI after bringing home Jacob Young who had singled to open the inning.

Nelly snaps an 0-for-18 skid with a liner to center that brings in another #Gators run!

The Gators maintained a 1-0 lead heading into the third. Alabama recorded their first and only run of the night after an RBI hit from Kolby Robinson brought home T.J. Reeves.

In the fifth inning, Maldonado and Young teamed up again to put the Gators up 2-1.  Young led off with a double and went to third on a hit by Brady McConnell.   Maldonado singled in Young and Kendrick Calilao plated McConnell with an RBI ground ball.

Tyler Dyson will get the start on the mound for Game 2 against the Tide. You can catch coverage of Saturday’s action on the SEC Network+ or listen live at 103.7 the Gator.