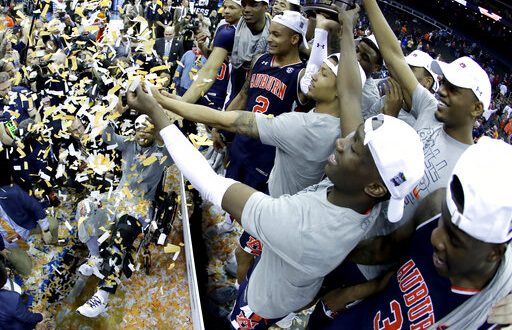 Auburn Advances to Their First Ever Final Four

The Auburn Tigers know how to survive and advance. Auburn has continued to pull out a win in late-game situations showcasing their talents in March by stringing together wins against the Kansas Jayhawks in the round of 32, the No. 1 seeded North Carolina Tar Heels in the Sweet Sixteen and on Sunday against Jon Calipari’s Kentucky Wildcats. The Tigers are headed to their first Final Four appearance ever in program history.

The last team that Auburn had lost to was the Kentucky Wildcats on February 23. This team has gone undefeated in the entire month of March and came into the NCAA Tournament off of an SEC Tournament championship win and ranked a 5 seed in the Midwest Region.

It’s no longer just about making history for Auburn University. Now, the Tigers have even more to play for as their leading rebounder Chuma Okeke went down on Friday against the Tar Heels with a torn ACL. Okeke averaged 6.8 rebounds and 12 points per game.

The team says they are playing for Okeke the rest of the way.

Auburn’s three-ball has been tough to stop all season long. Led by Jared Harper, Bryce Brown and the now-sidelined Chuma Okeke, the Tigers often times have put teams away with their perimeter shooting. Especially during the month of March. The Wildcats game plan was to contest the long ball and Harper said that Kentucky’s defense forced them to make tough shots from inside all game long.

Kentucky jumped out to a quick lead in the first half. The Wildcats led by as much as eleven points but Jared Harper and the Tigers refused to look rattled. The Tigers went into the locker room at the half only down by five.

The Tigers came out in the second half firing on all cylinders and took the lead less than two and a half minutes into the second half. From there, it was a back and forth battle at the glass and inside the paint.

With under 3o seconds left to play, the Tigers rejected two shot attempts by the Wildcats and had the ball with 10 seconds left to play. With one second left on the clock, Horace Spencer missed a contested three for the lead. Tie ball game. Free basketball.

Overtime was controlled by the Tigers. Auburn grabbed a lead at the beginning and would hold onto their lead for the remainder of the game. The Tigers grabbed their biggest lead of the game in overtime after a layup by Jared Harper to give the Tigers a 7-point cushion in overtime. This lead would be enough to eventually knock off the No. 2 seeded Kentucky Wildcats, 77-71.

PJ Washington led the Wildcats with 28 points and 13 rebounds but it wouldn’t be enough to take the game from the Tigers. Bryce Brown and Jared Harper shined as they combined for 50 points. Harper scored 26 points with 12 points coming in overtime, and 11 of his points coming from the charity stripe. Out of Brown’s 24 points in the game, 17 of his points came in the second half.

Bruce Pearl has pointed out during his team’s SEC Tournament run as well as his team’s NCAA Tournament run that even competing against these highly talked about universities has been an honor. He says that he hopes for his team to continue on their “Cinderella run.”

"Anything can happen in March!"

The Auburn Tigers are going to their first Final Four! pic.twitter.com/a0tKgHoGdh

The Tigers are undefeated in the month of March. Head coach Bruce Pearl says his team knows the journey that they still have ahead.

“We understand that we’ve got two more games to play in order to win a championship and we’re going to try and continue to focus on that,” said coach Pearl.

The Tigers will play their first Final Four game in history on Saturday against Virginia. Tipoff set for 6:09 p.m.

Previous Rays Defeat Astros 3 to 1, Continue Great Start To 2019
Next Texas Tech Advances to Final Four In A Wild Ending