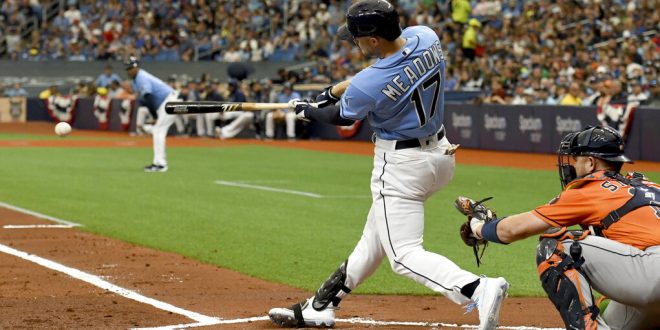 The Tampa Bay Rays have gotten out to a great start in 2019 as they took three out of four games from the Houston Astros. The Rays took the game three rubber match on Sunday afternoon as they defeated the Astros 3 to 1.

Many experts around the league expect Tampa to contend for a playoff spot this season.

The Rays showed why for the third time in a row as it was another complete game performance at Tropicana Field. Yonny Chirinos had an excellent start as he threw seven innings and only gave up one run. Chirinos struck out six and did not give up a walk.

Austin Meadows put the team on his back offensively as he was responsible for all three Tampa runs.

Meadows got the scoring starting in the first inning as he hit a two-out single to score Tommy Pham. Astros center fielder Jake Marisnick tied the game up in the third inning with a two-out solo home run. That would be the last hit of the afternoon for Houston.

The tie would not last long as Meadows once again came through in a big way. The designated hitter smacked a two-run home run that landed over the wall in center field.

Diego Castillo shut the door in the ninth inning, picking up his first save of the season.

The Rays have three games left in their seven-game homestand as they welcome the Colorado Rockies to St. Petersburg on Monday.

Tampa is heading into the series with a 3-1 record. Even though there are 158 games left in the season, the Rays are currently in first place in the American League East. Ryne Stanek will get the start the starting nod for the Rays while Chad Bettis will be on the bump for the Rockies. First pitch is at 7:10 pm.