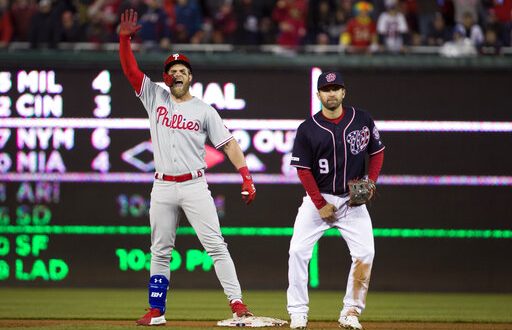 Right-fielder No. 3 Bryce Harper made his return to Washington being booed anytime the crowd got the chance. However, with an 8-2 win, he showed who’s in charge. Harper played seven seasons and 927 games on the Nationals.

In February, he went over to the rival Phillies signing a $330 million, 13-year contract. The Phillies remain the only undefeated team in the MLB at 4-0.

The Return to Washington

Sitting at No.3 in the line-up, Harper’s first two at-bats weren’t looking too good. Both ended in strikeouts swinging and the crowd roaring. Meanwhile, in right-field, he had a group of seven people standing behind him wearing shirts spelling out T-R-A-I-T-O-R and someone behind the dugout holding up a sign reading ‘snake.’

“Hearing the boos in the first at-bat just reminded me that I have 45,000 people in Philadelphia screaming and yelling for me,” Harper said. “Through the TV screen and things like that, I have people out in right field screaming for me and people behind the dugout today as well. I’m just fired up to be able to be a part of this organization, excited to be a part of this team and I look forward to going to battle every day with them.”

After striking out twice, whatever emotions he started with turned into drive. He went on with a double to right field, sending Jean Segura to third. And in the 6th inning an RBI single scoring Segura with a 6-0 lead. The hate didn’t seem to have much on Harper anymore.

And for the cherry-on-top in the 8th inning, Harper seny a 458-foot shot off Jeremy Hellickson going deep into right-field up into the second deck. Leaving the score 8-2 for the win.

Harper returns to the Nationals’ field for another match-up at 1:05 today.