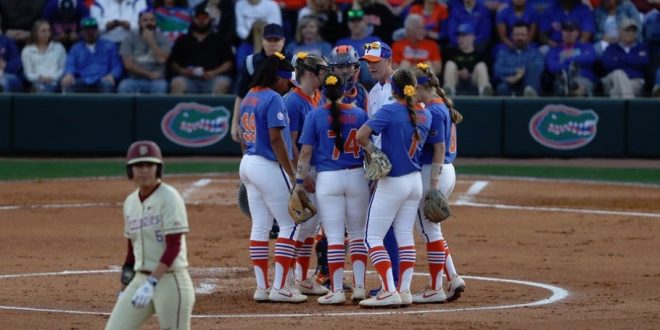 Florida Gators softball will have another test this weekend. UF plays host to the 14th-ranked Arkansas Razorbacks for its first home conference series since early March.

The Gators have not faced the Razorbacks since sweeping them in Fayetteville back in 2017. Tim Walton’s squad enters the matchup on a three-game losing streak.

Florida scored five total runs over these last three games and left a total of 23 runners on base.

Walton on points of emphasis at the plate:

Walton said his team performs well against teams outside of the country’s ranked teams. But, they struggle against teams that don’t make as many mistakes.

Walton on where the blame falls:

Arkansas at the Plate

Arkansas enters the weekend winners of two straight and three of its last four. The Razorbacks are 26-11 and .500 in SEC play at 6-6 along with 5-5 away from Bogle Park.

Courtney Deifel’s team is around the middle of the pack at the plate against conference opponents. Although, it ranks toward the bottom in both batting average (.219) and slugging percentage (.358).

However, Arkansas does boast the sixth-most runs scored against SEC teams with 41 and sits 8th in hits with 63. One glaring statistic for Arkansas at the plate is strikeouts. The Razorbacks strike out more than any other team in the league.

They have 91 strikeouts in their 12 conference games averaging between seven and eight Ks per game. Arkansas has struck out on over 26 percent of its total plate appearances in the conference.

Kayla Green’s 32 strikeouts on the season are the most among SEC batters and her teammate Nicole Duncan is right behind her at third with 30. Florida’s Jordan Roberts and Danielle Romanello sit among them at second and fourth.

Arkansas in the Circle and on Defense

The Razorbacks have a high strikeout rate from the circle too. They’re among the league’s best with over 257 on the season and 66 against conference opponents. Pitchers Mary Haff and Autumn Storms sit third and fourth respectively in strikeouts versus SEC teams.

Went 3-0 in the circle for @RazorbackSB. @18stormy is the #SECSB Pitcher of the Week. pic.twitter.com/7YGvSjNIig

A portion of the runs that come against Arkansas are unearned. This is due to the high amount of errors they commit. They have 22 over 12 games that have resulted in 25 unearned runs against Arkansas in the SEC.

Former Gator infielder Nicole DeWitt returns to Katie Seashole Pressly Stadium this weekend. This time she’ll be in red and white instead of orange and blue. DeWitt joined Deifel’s support staff in November 2018 as a graduate manager.

Friday’s game can be streamed on SEC Network+, Saturday can be seen on the SEC Network and Sunday will be on ESPN2.