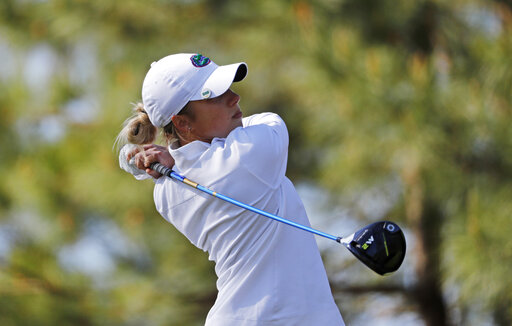 Sierra Brooks tees off the 12th hole during the first round of the Augusta National Women's Amateur golf tournament at Champions Retreat in Evans, Ga., Wednesday, April 3, 2019. (AP Photo/David Goldman)

Sierra Brooks and Marta Perez will get to compete on fairways they never thought imaginable.

For the first time in its 86-year history, Augusta National will schedule tournament tee times for female golfers.

The inaugural Augusta National Women’s Amateur kicked off on Tuesday, April 3, with two days of off-site competition at the Champions Retreat Golf Club. 72 of the world’s best female amateur golfers battled it out to surpass a tough 30-player cut that would allow them to play the tournament’s final round on Saturday.

Juniors Brooks and Perez survived the first phase of the groundbreaking tournament. Brooks shot a 71 and a 72 in the first two rounds to tie for third, in arguably her best showing all spring.

Meanwhile, Perez tied for 11th at 1-over. She finished with 70 in her first round and made history early on, draining the tournament’s first eagle. Perez then followed up with a 75 in her second round, a minor setback.

“There’s no greater honor than to have a chance to be a part of history,” Brooks said. “It’s something so many golfers dream of doing.”

Both Brooks and Perez eagerly await the chance to play the Amen Corner, the famous three-hole stretch on the 11th, 12th and 13th, where golf legends like Arnold Palmer, Byron Nelson, and Sam Snead commanded their green jacket wins.

With both in contention at the so-called “golfer’s heaven”, anything is possible.

A support system from the Swamp

Though head coach Emily Glaser and assistant coach Janice Olivencia may not be inside the ropes advising their players, they’ll be cheering the pair on as spectators in a milestone for Gators women’s golf.

“It really speaks volumes for our program, and what we’re doing here,” Olivencia said. “Coach Emily and I have been together for the last seven years. We started together on this journey, really building what our philosophy and what Gators should be.”

The duo is familiar with their players’ fiery determination on the golf course, but encourage the two to bask at the moment.

“You play good golf when you’re happy, and when you’re enjoying things and in a good frame of mind,” Glaser said.

A final round for the ages

Brooks and Perez prepare for the historic conclusion at an all-day practice round on Friday, April 5.

The final round will start on Saturday, April 6, with early TV coverage from Golf Channel at 10 a.m., then switching over to NBC at noon. 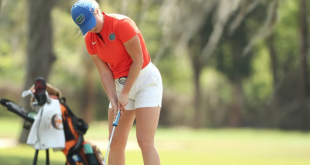 Florida women’s golf is on the road again, this time with an SEC challenge on …