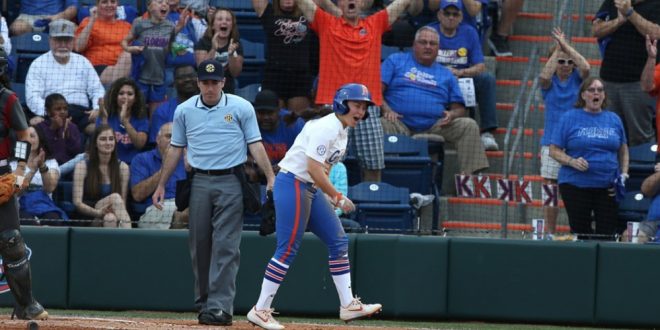 The Florida softball team was able to stop its three-game skid behind the arm of Kelly Barnhill. The eighth-ranked Gators defeated the 14th-ranked Arkansas Razorbacks 3-0 Friday night.

The Gators extended their streak over Pig Sooie to 28 straight with the win. UF is now 10-9 against Top 25 opponents this season.

The game saw Nicole DeWitt’s return to Katie Seashole Pressly Stadium. This time she returns as a graduate manager with Arkansas.

Kelly Barnhill on seeing DeWitt in red and white:

Barnhill Shoves for the Gators

The Gator ace shut down the Razorbacks attack Friday night. She struck out seven batters, allowed no walks and only three hits for her 14th complete game of the season. Additionally, Barnhill picked up her sixth shutout of 2019.

She earned her 20th victory of the season (20-5) and obtained the 90th win of her career on Friday.

Plus, she raised her season strikeout total to 210 after the start. That is the best mark in the NCAA.

She was helped out by her defense in the game too. First baseman Amanda Lorenz and outfielder Lily Mann made noteworthy plays to end two different innings. Mann made a sliding catch to end the fourth and Lorenz turned an unassisted double play to end the fifth.

T4 | @kkatlyn111 works efficiently through the Arkansas order and @mannfan47 caps the frame with great catch down the right field line!

Barnhill on the defense behind her:

After her web gem, Mann came up to bat in the bottom of the fourth inning with two runners on. She would single to load the bases for Florida with no outs.

The Gators would take advantage of this to push across two runs. Hannah Adams grounded to the shortstop who proceeded to airmail a throw home. The ball went all the way to the backstop and allowed Sophia Reynoso and Kendyl Lindaman to score. Those runs would essentially put the game away at 3-0.

Walton on his team’s offense in the game:

Florida would only muster three hits on the day as Arkansas pitcher Autumn Storms did her best to stymie the Gators at the plate. Florida saw counts of 2-1 or better just five times throughout the ball game. Gator coach Tim Walton said on Wednesday he wanted his team to take more chances at the plate.

Walton pointed out a swing-and-miss by Jordan Roberts on Friday that he said might have left the yard if the drop ball she got was just a little higher.

Florida will be back in action Saturday night in hopes of taking the series against the Razorbacks.