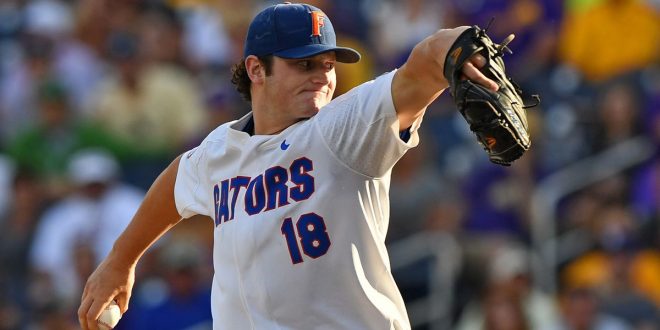 The Florida Gator baseball team (21-13, 4-8) has struggled against talented SEC teams and Ole Miss proved to be another tough obstacle for this young Florida team.

After falling to No. 18 Ole Miss (22-10, 8-4) on Friday night by a 12-4 score, the Gators looked to rally back in a Saturday doubleheader that was necessitated by bad weather moving into the Oxford, Mississippi area on Sunday.  But that rally never came as Florida dropped a doubleheader on Saturday to the Rebels losing 16-4 and 12-10.

Gators Struggling on the Mound in Game 1

Ole Miss carried their offensive momentum into Saturday, putting Florida pitchers into difficult situations.  Tyler Dyson got off to a rocky start on the mound for Florida, giving up two unearned runs in the bottom of the first.  Down 3-0 at the beginning of the fourth inning, Jud Fabian hit an RBI single to center field to advance Nelson Maldonado home for Florida’s first run of the day.

#Gators are on the board!

Nelly leads off with a double, then Fabian brings him in with a single to center.

In the bottom of the fourth, Hunter Ruth took the mound for the Gators. He would struggle in relief, giving up 12 hits and 10 runs in just 2.1 innings of work.  The Rebels would score two runs in the fourth and six runs in the fifth to break the game open.  They would add two more runs in the sixth and three more in the seventh inning.   The Gators scored three in the eighth on an RBI double by Wil Dalton and a two RBI double by Austin Langworthy but it was too little, too late as Florida would lose 16-4.

Gators Offense Heats Up in Game 2

Florida started off Game 2 looking like a completely different team.  On the mound, Christian Scott got off to a hot start for the Florida, pitching three scoreless innings.  Meanwhile, in the top of the third, the Gator offense got things going. Kendrick Calilao plated two runs on an error, and Jud Fabian drove in two with a single to give the Gators a 4-0 lead.  They would score four more runs in the fourth as Calilao drew a bases loaded walk, Austin Langworthy hit a sacrifice fly and Wil Dalton had a two RBI double to give the Gators an 8-0 lead.

But Ole Miss rallied back with two runs of their own in the bottom of the fourth and they scored eight runs in the bottom of the fifth after about an hour rain delay.  Scott was chased from the game after allowing six earned runs and reliever Nolan Crisp didn’t fare much better, giving up six runs in just two innings of work.  Florida pitchers issued three consecutive walks in the inning, with two of them forcing in runs as Ole Miss took a 10-8 lead.

The Gators were able to tie things up, 10-10, in the top of the sixth on a solo homer by Maldonado and a wild pitch but the Rebels regained the lead in the bottom of the sixth on a balk.   They would add a run in the seventh on an RBI double by Ryan Olenek.

The Gators will travel to rival Florida State in a midweek match-up on Tuesday evening. Florida will look to extend its 10 game win streak over the Seminoles.

You can watch the game on the ACC Network or listen live to the game 103.7 FM The Gator.