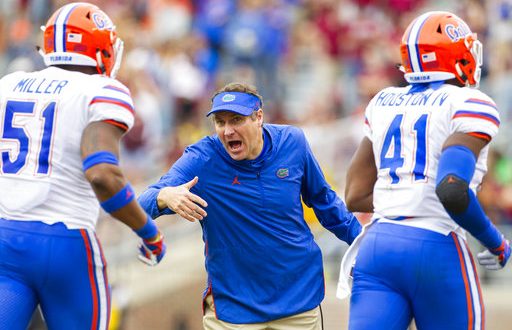 Gator football returns to the Swamp this Saturday for the 2019 Orange and Blue spring game. Head coach Dan Mullen shared what he expects out of this weekend from both his team and Florida fans.

The spring game weekend tends to be full of Gator sport festivities each year. This year, in addition to Gator Football, there will be four other sports in action:

Mullen spoke of the spring weekend as more of a campus event that features football, saying:

“There’s a lot of things going on around campus and other activities,” Mullen said. “It’s kind of a festival weekend on campus and the game is part of the festivities, more than there’s festivities that surround the game.”

As far as the format of the game, it will be a 2-hour scrimmage. Mullen said he is looking forward to the teaching moments that will stem from it and looks to wrap up spring on a good note.

“You are hoping to see a foundation of guys who are ready to go play.” — Mullen on goal after Saturday.

Pressure of Playing in the Swamp

For new recruits and young players, Saturday’s spring game will be the first time they will take the field in front of the home crowd. Mullen said he hopes the crowd creates an exciting environment, as the loudness and energy can often put pressure on his players, meaning they will need to be able to adjust to live-action play.

“Now in the spring game, I’m a young player,” Mullen said. “I get to go in the stadium and there’s a lot of people watching. That can change the psyche of an 18 or 19-year-old kid.”

Saturday’s game is set for 1 p.m. at Ben Hill Griffin Stadium. The game will be streamed on the SEC Network Alternate channel.

Born and raised at the ballpark! Typically quiet- until it comes to sports. I'm a South Florida native with a passion for baseball nearly as strong as my faith. Grew up in garnet + gold, turned out sporting orange + blue. Likely to be found with a camera. And yes, I take food pictures.
@victoriarossman
Previous Baylor Wins National Title
Next Virginia, Texas Tech Each Look for School’s First Title in National Championship Game