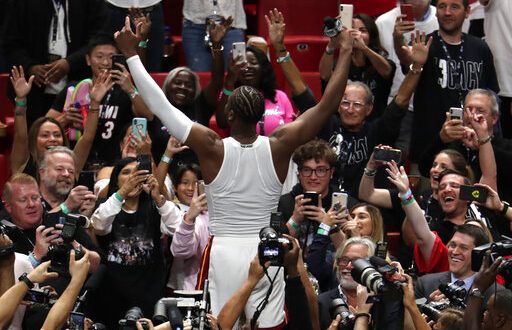 Dwyane Wade Shines in His Final Home Game In Miami

Dwyane Wade put on one last great performance in his final game in Miami.

The future Hall-of-Famer scored 30 points while hitting four three-pointers in the fourth quarter. He led all scorers and the Miami Heat defeated the Philadelphia 76ers 122-99. The news of the Heat being eliminated from playoff contention was overshadowed by the sold-out crowd all there to see Wade’s final home game.

Wade did not hesitate to initiate the scoring. After the opening tip-off, Wade immediately spurt into action by scoring his first two points on a one-handed dunk. He gave fans one last glimpse of the No. 3 jersey attacking the lane for a dunk as he did so many times throughout his 16-year career.

In true @DwyaneWade style he came in HOT and put up our first ✌️ points of the game! #Wad3Watch – 2 points pic.twitter.com/UHS4pTrXba

Sharing the Court One More Time

Wade was drafted by the Heat in the 2003 draft as the fifth pick and is ending his career where it all began. Wade spoke on how it felt to finish his career with the same team that gave him the opportunity to be in the NBA.

The Heat also signed undrafted free agent Udonis Haslem from Florida in 2003. Haslem and Wade entered the league the same year and are leaving together as well. Both players are the only players in franchise history that were part of all three championships in 2006, 2012 and 2013. It was only fitting to see both players share the court one more time in front of the fans that saw them grow over the last 16 years.

For the last 16 years, Wade has called Miami home. The more his stardom grew, the more fans recognized Wade as the premiere Miami sports icon. Wade has treated fans to high flying dunks, game-winning shots and one of the best pump fakes in NBA history. It is no surprise that fans from all over associate Wade with Miami as Wade County instead of Dade-County.

Although this was Wade’s final home game, fans will still be able to see him play at Brooklyn as the Heat take on the Nets in the season finale tonight at 8.

It’ll be only a matter of time to see No.3 hanging in the rafters forever so fans can acknowledge a legendary career.