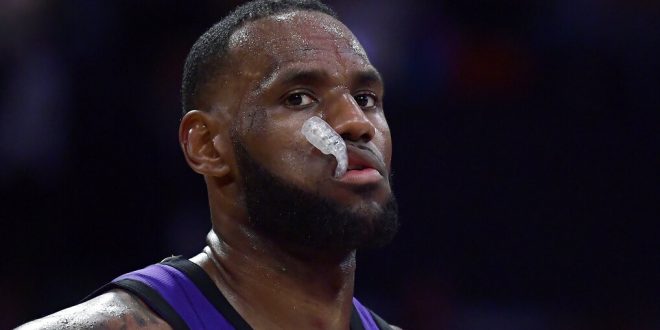 FILE - In this March 1, 2019, file photo, Los Angeles Lakers forward LeBron James pauses during the closing seconds of the team's 131-120 loss to the Milwaukee Bucks, in Los Angeles. The Lakers have endured a miserable season, giving James a much longer summer break than he's used to. (AP Photo/Mark J. Terrill, File)

NBA Offseason 2019: Where do the Lakers go from Here?

The 2019 season was without a doubt one of the most disappointing seasons for the Los Angeles Lakers.

Expectations were at an all-time high when the organization signed Lebron James at the beginning of the season. However, the fans, front office, and most importantly the players never thought the season would end with such a sour taste in their mouths.

Injuries Were Too Much To Handle

The Lakers knew they weren’t going to be the best team in the West from the get-go. Their momentum and stride quickly began to pick up the pace along with their team chemistry in late 2018.

Unfortunately, the team’s momentum was derailed when LeBron missed a career-high 17-games due to a serious groin injury that occurred on Christmas Day against the Golden State Warriors.

Following the injury, the Lakers posted a 6-11 record with James out of the lineup. The timing couldn’t have been worse. His return was inevitable, however, they went from a secured playoff berth to fighting for an 8th seed spot once he came back. Then, the worst occurred.

Lakers point guard Lonzo Ball has been shut down for the remainder of the season, league sources tell @TheAthleticNBA @Stadium. Ball had his left ankle re-evaluated by doctors today and sides agreed on course of action.

The former 2nd overall pick and the Lakers star point guard was out for the remainder of the season. In 47 games this season, Lonzo Ball averaged 9.9 points, 5.4 assists, and 5.3 rebounds while shooting 32.9 percent from beyond the arc.

Ball already missed 18 games when he injured his ankle against the Rockets back on Jan. 19, his ankle was then reevaluated on Feb. 28 and only took nine days to realize he shouldn’t come back.

These injuries weren’t the only issues for the franchise. The Anthony Davis trade deadline left a huge impact on the Lakers’ young roster. It left a huge mark on team chemistry and trust between the roster and the front office.

The Lakers president of operations Magic Johnson was sold on acquiring the Pelican’s former number 1 overall pick for all the marbles. He made it known that he was willing to trade virtually all the young stars on the roster, including some veterans and draft picks.

THE reason the Lakers have nosedived is that LEBRON lost heart and interest after HE didn't get what HE wanted at the trade deadline: AD. LeBron didn't even try on defense at Memphis. All-time embarrassing.

The deal later fell through and left a weird vibe inside the locker room. The young players felt betrayed and just saw their names being thrown around on television for a guy who’s not even on their team.

They shortly did not play well on the court together. Two days before the trade deadline, the Lakers lost by 42 points to the Indiana Pacers at home.

The Lakers began to fall apart like melted ice cream on a hot summer’s day, yet the cherry on top was yet to be placed.

As of recent headlines, the former president of operations has stepped down from his position through an abrupt press conference this past Tuesday night. Folks, there’s your missing cherry. The man who managed the downfall of the Lakers’ chemistry issues due to the trade drama left without a trace.

Many of the front office staff were caught off guard. Like Lakers owner Jeanie Buss had no idea about Magic’s decision.

Why Did He Step Down?

He mentions why he didn’t let his boss know and why he decided to step down from a crucial role in one of the most glorified teams in the NBA.

Magic was not having “fun”: He mentions how he did not want to affect a person’s livelihood in a negative way. He couldn’t follow Buss’s orders to fire someone.

In the end, players like Kyle Kuzma and Rajon Rondo had some positive remarks about Magic Johnson’s role and wished him the best of luck, but did not enjoy the downfall of the season.

Kuzma reiterates what I’ve mentioned above; injuries, momentum, and just a disappointing season.

What’s ironic though, is how Rondo mentions that the team gained chemistry towards the end of the season. He takes the blame as a veteran for not taking more of a leadership role earlier in the year.

However, with these statements, where do the Lakers go from here?

We All Agree they hit Rock Bottom, but will the Lakers go Up from Here? Or Get Worse

Head coach Luke Walton was the butt of social media jokes all season. Fans and media have blamed him for the Lakers turmoil in some circumstances. Walton had exit interview meetings with the players the day after Magic announced his departure.

Wait for it though, because this gets sketchy.

The Lakers had already held an exit meeting with LeBron on Saturday….without Walton being there.

Magic states he was about to fire head coach Luke Walton in an interview with The Jump’s very own Rachel Nichols.

I still had questions for Magic after his shocking resignation last night & he was kind enough to join me 1-on-1 to answer them. Did he owe it to Jeanie Buss to have told her directly he was resigning? Did he leave the Lakers in the lurch? Was he about to fire Luke? And more… pic.twitter.com/UAwbncNX6D

What’s weird about this situation is that it leaves everyone in the front office in an awkward scenario. Buss has reached out to close “family” for Lakers positions. Magic was a close friend to the Buss family and the Lakers organization.

GM Rob Pelinka was Kobe Bryant’s agent, which automatically makes him close to the Lakers. Her best bet should be to reach out of her comfort zone and meet with potential candidates who don’t have a close tie with the Lakers.

NBA Insider Ramona Shelbourne says that Pelinka is in charge now, will be scanning and evaluating all aspects of the team. Buss will go to the owner’s meetings this week in New York.

Pelinka has never had a front office position before this job. However, Warriors GM and former agent Bob Myers is rumored to be the perfect candidate to replace Magic Johnson. Although he’s still under contract, it would be foolish to leave a dynasty he’s helped build.

The name that keeps coming up as the Lakers’ natural target: Ex-UCLA Bruin Bob Myers https://t.co/I8R9dBwdUQ

For the foreseeable future, it’s unknown, it’s unsure what the Lakers should do. But whatever it is, they need to hit the free agent market in the offseason. They must try again to target Anthony Davis and pray to the basketball gods that Lebron James doesn’t get injured again.

Recent grad from the University of Florida. Editing all articles on here while helping out the newbies. Love all things basketball.
@@MarcoJMartinez_
Previous Florida Gators Baseball Hosts South Carolina
Next Rodgers and Packers Move Forward