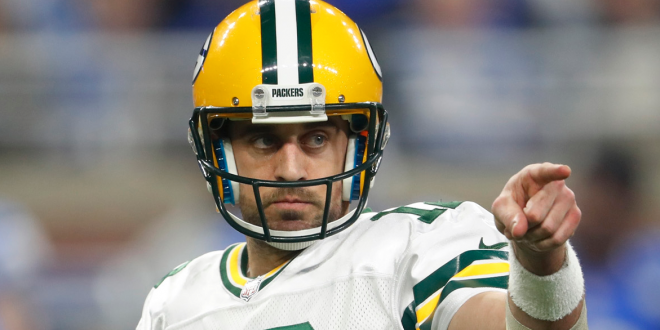 Rodgers played through a lot of adversity in 2018. It was recently revealed that Rodgers had played through a Tibial Plateau fracture and a sprained MCL last season. The Packers made some moves after the season starting with the firing of former Head Coach Mike McCarthy. Green Bay was also active throughout free agency signing some solid players on the defensive side of the ball.

Now that Aaron Rodgers has had time to get back healthy, it is going to be interesting to watch how he performs this next coming year.

Whenever he is healthy, Rodgers is a threat to win the MVP every year. The Packers have some solid weapons on the offensive side of the ball including, Davante Adams, Jimmy Graham and Aaron Jones. It should be worth monitoring what direction the Packers go in the NFL Draft after using most of their cap space in free agency on defense.

New Man at the Helm

Aaron Rodgers will play the 2019 season with a head coach not named Mike McCarthy. After the 6-9-1 regular season finish, the Packers decided to relieve McCarthy of his duties as Head Coach. McCarthy and Rodgers had some great years together, however the Packers felt it was time to move on.

The Packers decided to hire Matt LaFleur as their new coach. It will be interesting to see what the relationship will be like between LaFleur and Rodgers in year one. LaFleur is an offensive guru who has spent time as both an Offensive Coordinator and Quarterbacks coach in the NFL.

A healthy Rodgers and an improved defense for the Packers could easily return Green Bay to the playoffs in 2019. The Packers will hope that LaFleur and Rodgers relationship will prosper in their first year together.

Regardless of the circumstances, Rodgers has the playmaking ability to keep Green Bay afloat in 2019. The Packers will need to make vast improvements this season in order to get back atop the NFC North standings. With a young and surging Chicago Bears team and two solid opponents in the Minnesota Vikings and Detroit Lions, this will not be an easy task for Green Bay.

Rodgers and the Packers can get a much needed confidence boost week one if they can beat the division rival Chicago Bears in the Thursday Night Season Opener.

Previous NBA Offseason 2019: Where do the Lakers go from Here?
Next Mick Cronin takes over as UCLA head coach