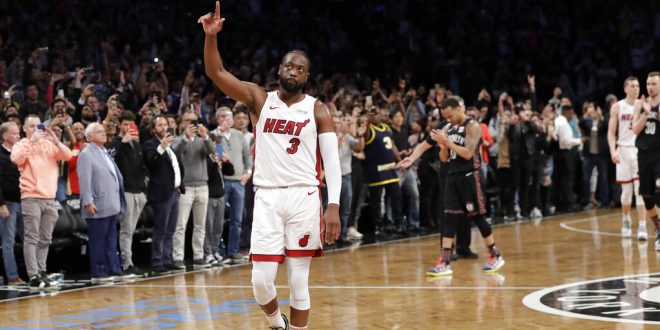 Miami Heat guard Dwyane Wade (3) acknowledges the crowd's cheers after playing in the final NBA basketball game of his career, against the Brooklyn Nets on Wednesday, April 10, 2019, in New York. (AP Photo/Kathy Willens)

Where do the Miami Heat go from here? A look into next season

Dwyane Wade had his #OneLastDance, so it is finally time for the Miami Heat to find a new dance partner.

Although Wade’s farewell tour has been the focal point of Miami’s season for many, the Heat missed the NBA playoffs. In a limbo, Miami has not been to the playoffs two years in a row since the “Big 3” era.

Meanwhile, Miami’s only had one top-10 draft pick since then—Justise Winslow—and has not landed another star free agent. Will Miami Heat president Pat Riley turn up the Heat and push for the playoffs or tank and hope to find a new superstar through the draft?

Miami’s front office has made big decisions—some sporadic—since the “Big 3” era that are still in effect. With the permanent loss of Chris Bosh and the 30-11 run in the second half of the 2017-18 season, Miami signed many aging veterans to big, multiyear contracts.

The league’s highest payroll in 2018-19 ($154,621,708), according to HoopsHype. That is more than $8 million ahead of the NBA-champion Golden State Warriors, arguably the greatest team of all-time.

Next season, James Johnson, Kelly Olynyk, Dion Waiters and Hassan Whiteside are making a combined $68,578,303 million. Add in point guard Goran Dragic’s player option ($19,217,900) and that puts the Heat at over $88 million.

Despite this, there are positives that can be explored. Ryan Anderson, who has barely featured, could be waived. Moving on, Chris Bosh’s contract was spread out to relieve cap space in 2017.

Guard Rodney McGruder ($1,544,951) was waived to dodge the luxury tax this season. Wade and Udonis Haslem’s minimum contracts are up—and the Heat wants Haslem back. Additionally, forward Derrick Jones Jr. is progressing and is making less than two million next year.

If Riley wants to trade for a star player like Bradley Beal, he has many big-money contracts to exchange—if any team finally wants them.

“Keep it going for me.” – @DwyaneWade pic.twitter.com/XgIY2nDDQS

The NBA Draft has been forgettable for Miami in recent years. Erik Spoelstra’s young core of players—Adebayo, Richardson and Winslow—are the first young players to have a significant role in the team since Michael Beasley and Mario Chalmers.

The Heat are in a similar spot as last season when they picked Adebayo, likely picking between 10-15. Many mock drafts have Miami going with a forward.

For instance, Sports Illustrated has Miami taking French talent Sekou Doumbouya of Limoges and Gary Parrish of CBS has Jontay Porter coming to South Beach. With Richardson and Winslow being versatile, Miami’s aging squad and a need for scorers, a dominant offensive forward could be an ideal fit.

As of right now, Miami has no second round pick in 2019 or 2020 and will have no picks in 2021. If the team wants to build from the draft, Riley will have to start making some calls or the team losing more games. It is not the #HeatCulture narrative that the Heat has pushed in recent memory, but everything must change to some extent eventually.

Miami may not dance anymore with someone who has the flashy moves of Wade, but the Heat cannot pump-fake its way around a rebuild.