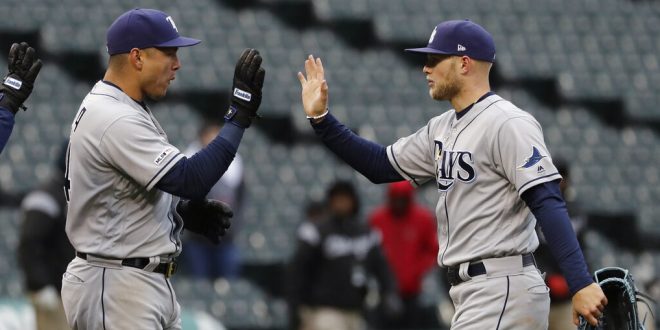 With just three losses on the season so far, the Tampa Bay Rays are off to a good start on the 2019 MLB season. The Rays are currently in first in the AL East, completing their sweep on the Chicago White Sox after a convincing 9-1 win yesterday.

Rays Put On a Show

After an hour and 40 minute delay due to sleet and rain, the Rays didn’t let some bad weather and a temperature of 38 degrees bother them as they came out swinging. Leading the charge was centerfielder Tommy Pham, hitting two home runs yesterday and extending his on-base streak to a club record 45 games.

Pham’s first homer came off of Sox pitcher Reynaldo Lopez and soared straight between first and second into the stands. Pham wasn’t the only one scoring, however, with his second home run following up to Austin Meadows’ one home run in the game.

Meadows also had a single, double, and three RBI. When asked about his performance, Meadows explained that “The biggest thing is just being myself out there, just having fun, it’s fun to just go out there each and every day and know we can compete with anybody”.

Pitcher Tyler Glasnow struck out a career-high 11 batters in 6 innings.  Overall it was a dominant performance by the Rays, who look to continue adding Ws to their record and maintain their position in the AL East as the season goes on.

Things are not looking so hot for the White Sox, as they lose their fifth consecutive game. They are also off to their worst start (3-8) since 1997.

The Rays will head to Toronto on Friday to start their three-game series with the Blue Jays. The game starts at 7 pm and will be the first time the teams meet up this season.

Previous Where do the Miami Heat go from here? A look into next season
Next Lightning drop opening Playoff Game