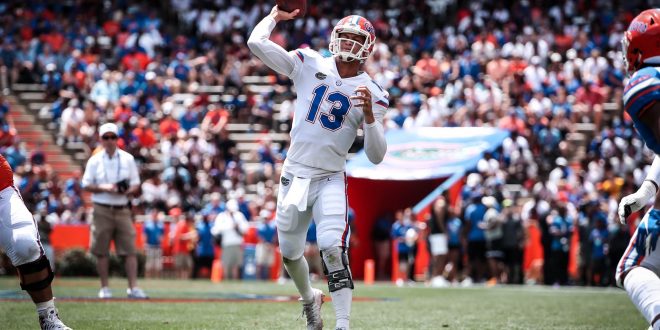 The title is not a typo.

It was an explosive offensive performance as the Gators scored a combined total of 95 points and totaled 920 yards during the 2019 Orange and Blue game.

“A lot of the points we put up this year were explosive plays through the air,” second-year Florida head coach Dan Mullen said. “That’s guys who are older, more experienced and know how to play within the system.”

“Today was a lot about celebration.” –@CoachDanMullen

“It’s the same guys, but now you’re talking about another year. These guys are bigger, faster and stronger. A year in the program and understanding the offensive scheme and understanding how to make plays within the offense,” Mullen says about the improvement and versatility of the offense overall.

With a vanilla defensive performance, all eyes were on the offense, in particular, Franks. Teammates like Trevon Grimes were impressed with his performance.

#Gators Trevon Grimes on Feleipe Franks' performance this afternoon at the #OrangeAndBlue Game. Franks threw for 327 yards and 4 touchdowns on 13-of-18 passing.@ESPNGainesville pic.twitter.com/RiLJLHCeSm

“There is different pressure on him today then there is on a regular practice,” Mullen says. “If you’re a quarterback in Florida, you’re under a lot of critique.”

Franks and Grimes were a dynamic duo on Saturday. The sophomore wide receiver recorded 195 yards, breaking Dallas Baker’s record (176 yards) from the 2004 Orange and Blue game.

Mullen says having a player like Grimes embrace his position on the field has allowed other receivers and specifically, the quarterbacks have more options.

While #TeamOrange stole the show, senior wideout Freddie Swain on #TeamBlue had five catches—including a 54-yard TD reception from Trask—115 yards and 2 touchdowns.

Meanwhile, Kadarius Toney opened the spring game with a 40-yard completion to Franks. In addition, the Alabama-native had four receptions for 94 yards including a 41-yard reception from Franks in the first quarter.

With an offense clicking, fans can start the 133-day countdown to the season-opening game against Miami on August 24 in Orlando. While Mullen is proud of his team’s performance, he says there is room for improvement and looks forward to the summer practices to polish his team.