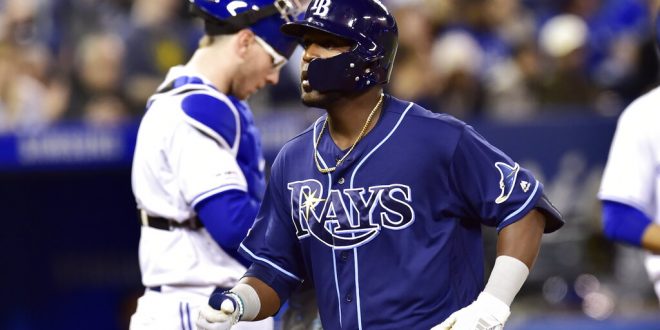 The Tampa Bay Rays (12-4) capped off a five-run burst in the eighth inning to beat the Toronto Blue Jays, 8-4, for their fifth straight series victory this season.

The Rays lead the AL East and match their 2010 record for the best 16-game start in franchise history.

Our FIFTH straight series win to lead off the season!#RaysWin!

Pinch-hitter Guillermo Heredia helped the late offensive burst for the Rays with a two-run homer. The Rays led 3-2 before breaking away in the eighth against the trio of Toronto relievers.

But, before Heredia’s two-run homer, pinch-hitter Mike Zunino had a two-run single.

Rays right-hander Charlie Morton allowed one run and four hits in 4 2-3 innings. Morton has yet to give up more than four hits in any of his four starts in the season. Marcus Stroman (0-3) gave up three hits, four walks, and three unearned runs while striking out five in four innings.

Adam Kolarek (1-0) pitched one perfect inning to pick up the win as Blue Jays starter.

Sunday’s 8-4 win over the Blue Jays means they’re leading the AL East by five and a half games.

After losing their home opener to Houston, the Rays won three straight over the Astros and two of three against Colorado before hitting the road. They won two of three in San Francisco and swept a three-game series against the White Sox before collecting their fifth series win.

Tyler Glasnow, who was acquired from Pittsburgh last year in a trade for Chris Archer, is 3-0 with a 0.53 ERA.

The Rays are also fourth in the AL in on-base percentage as they have 16 bases in 17 attempts.