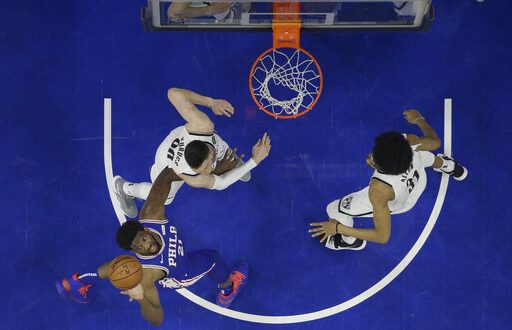 Philadelphia 76ers' Joel Embiid, left, of Cameroon, reaches back for the ball with Brooklyn Nets' Rodions Kurucs, center, of Latvia, and Jarrett Allen, right, during the second half in Game 2 of a first-round NBA basketball playoff series, Monday, April 15, 2019, in Philadelphia. 76ers won 145-123. (AP Photo/Chris Szagola)

The last time a team scored 51 points in a quarter during an NBA playoff game, John Glenn was the first American to complete his orbit around the Earth, Connie Francis’ Don’t Break The Heart That Loves You was the Billboard No. 1 song of the week and Marilyn Monroe was singing Happy Birthday to President John F. Kennedy.

Things weren’t looking good for the 76ers at halftime. Third-seed Philadelphia was barely ahead of the six-seed Brooklyn Nets (65-64) after dropping the first game in the series. But then something happened–a burst of energy that ignited The Wells Fargo Center–and then it was all Philadelphia. If you were to look at the score, 145-123, you might think the offense was the answer to Philadelphia’s problem. However, Sixers head coach Brett Brown attributes the defense as well.

But from an offensive standpoint, it was a whole team effort. Guard Ben Simmons recorded his second triple-double scoring 18 points, 12 assists and 10 rebounds.

“I was thinking about those ‘boos’ from last game. But you know, I got a lot of love for this city and the fans here. Every time I step on the floor, I play as hard as I can and I was just showing the hustle I’m trying to give each and every game. This is not only for my teammates or my family but for the city,” Simmons said in a post-game interview.

Joel Embiid also had an explosive performance on Monday night, leading the Sixers with 23 points.

“Playing through the pain,” the center said after the win. “Just trying to give whatever I can.”

The Montverde Academy alumnus is suffering from a knee injury and missed five the Sixers last seven regular season games. Brown said it was a “game-time decision” and it was evident he gave all he could to help Philadelphia secure a win. Embiid started off the third quarter with a personal 8-0 run and his teammates helped him extend the team’s run to 21-2 within the first few minutes of the third.

“I feel like we as a group, sometimes they need me, and I just felt like just playing through the pain and playing for them,” The Cameroonian said.

The 76ers head back to Barclays Center on Thursday, April 18 for Game 3 against the Brooklyn Nets.

LeBron James’ triple-double in Game 6 closed the door on the Miami Heat, and send …