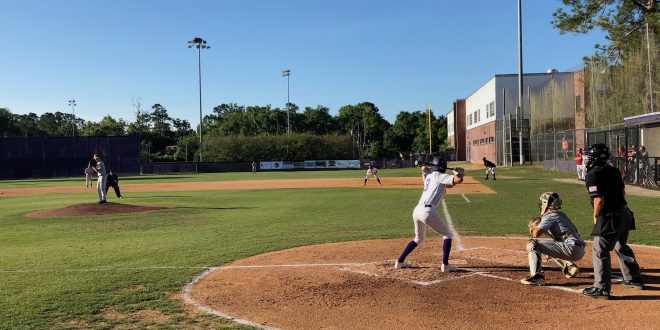 The Gainesville High Hurricanes defeated the visiting North Marion High Colts 10-8 on Tuesday. Luke Marquis started on the mound for the Hurricanes and Wyatt Campbell was the pitcher for the Colts.

Through two innings, the Colts built up a sturdy 4-1 lead thanks to successful hitting. Cameron Martinez and Nolan Lewis contributed with RBIs in the first inning. In the second inning, Gavin Miller sent a two-run dinger over the center wall for the game’s first home run.

An inning later, Martinez hit a home run of his own to extend the Colts’ lead to 5-1 with over half of the game remaining.

Both teams demonstrated their hit power throughout the game, sending multiple pitches deep into the outfield. North Marion outhit Gainesville in terms of depth with three home runs, with Gavin Miller, Cameron Martinez and Jake Blair each notching one apiece.

Blair’s home run came in the top of the fifth and was the team’s first run since the previous inning, though the runs were nearly 25 minutes apart. While they hit no home runs, the Hurricanes did hit several balls near the warning tracks. The home crowd got especially rowdy on Zeb Marquis’ deep double to left field in the bottom of the third.

The bottom of the fourth was very favorable for Gainesville, who were down 7-2 to start off the inning. A Luke Marquis single allowed Seth Cox to come home and score the Hurricanes’ first run of the inning.

On the ensuing at-bat, David Rowe crushed a triple to the back right field. Rowe’s hit brought two runners home thanks to not one but two errors by the North Marion outfield, cutting the Colts’ lead down to two heading into the fifth inning. It wasn’t until the fifth inning when the Hurricanes finally caught up to the Colts.

Despite a five-run deficit earlier in the game, Gainesville clawed back and tied North Marion at eight thanks to a Marcos Aular single with two RBIs. A double by Luke Marquee on the very next pitch gave the Hurricanes their first lead of the night, 9-8.

Both teams entered Tuesday’s game with a winning streak. Gainesville had won six consecutive games with their last defeat coming on March 22nd. North Marion’s streak ended at three games as they lost their first game since April 2nd. The Hurricanes will look to extend their winning streak to eight on Thursday, April 18th at home against Belleview High while the Colts will travel to Leon High on Friday, April 19th.