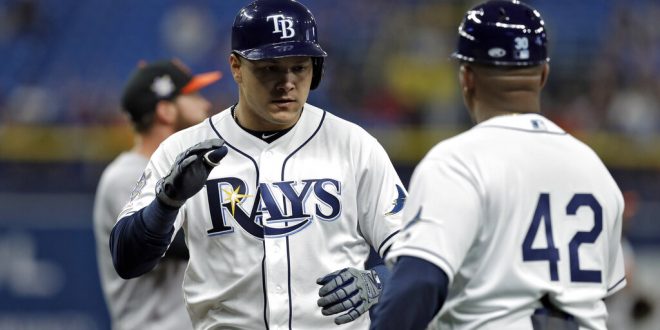 Although it’s still incredibly early in the MLB season, the Tampa Bay Rays have been hot. They’re 13-4 on the year, and lead the AL East by 5.5 games. MLB stats figured out just how dominant that is.

The first place teams in every other division COMBINED have a 5 game lead. pic.twitter.com/hNiwdC6WaR

After clinching a 4-2 win last night, they host the Baltimore Orioles in the second game of the series.

The Orioles took the early lead, scoring in the top of the first and again in the third. Those runs were produced by Rio Ruiz and Renato Nunez.

But by the fourth inning, the Rays were able to put together a string of offense. After a sacrifice fly brought in a run, Avisail Garcia hammered a two-run homer to put Tampa Bay on top. Another run in the eighth inning sealed the win for the Rays.

Garcia now has a pair of home runs on the year. He’s tallied 18 hits in 55 at bats at this point in this season.

On the mound, the pitching duel was between Rays’ Tyler Glasnow and Orioles’ Dylan Bundy. Glasnow pitched through seven innings and although he recorded just three strikeouts, he remains undefeated on the season. With four wins under his belt, Glasnow is pitching a 1.13 ERA on the season, the best in the American League.

With 2018 AL Cy Young Award winner Blake Snell out on the injured list, Glasnow will need to continue to ensure his pitching keeps the Rays in the game.

In contrast, Bundy has yet to clinch a win. Although it’s still early, his ERA is sitting at a high 7.79.

Last night’s win kicks off a homestead for the Rays – who, after the series wraps up with the Orioles, immediately host the struggling Boston Red Sox and Kansas City Royals.

Tonight, the Orioles will have David Hess on the mound. Hess leads the Baltimore pitching squad with a 3.32 ERA. And although Trey Mancini was quiet in last night’s loss, the team’s lead hitter may have a different showing tonight. Ryne Stanek will be pitching for the Rays – he’s got a 2.16 ERA on the season.