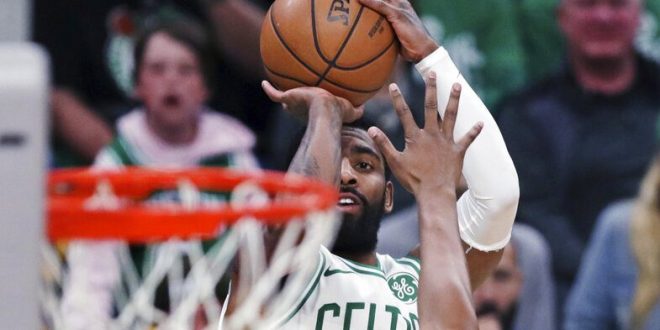 Kyrie Irving was in full Uncle Drew mode on Wednesday night when he and the Celtics took on the tough Indiana Pacers inside the TD garden. This game was nuts due to the Celtics overcoming a 12-point deficit in the 4th quarter, winning 91-99.

The Pacers’ Bojan Bogdanovic was feeling it from deep throughout the whole game, ending with 23 points. However, Irving started launching from deep and the rest was history.

This game concluded as a possible last home game for Boston in the series if the Celtics sweeps the Pacers.

Overall flow of the Game

The Pacers came out to a strong early start and both teams finished with a high scoring first quarter, with Indiana leading 33-29. I can’t emphasize this enough, Bogdanovic isn’t a household name, but we must give credit where credit is due, because this man is having an excellent year. The Croatian international is averaging career highs in points (18.0), assists (0.9) and rebounds (4.1). He ended the night 4-of-8 3-point shooting.

Four key players amounted to double figures for the Pacers, three of them were starters.

Celtics too much to Handle

However, after a 29-point third quarter by the Pacers, they amounted to a choke of a performance in the fourth quarter.  Even with Marcus Smart out, their defensive tenacity was unstoppable. Indiana was held to just 12 points in the final 12 minutes, compared to Boston’s 31.

To emphasize the Celtics’ performance even more thoroughly, only three players scored in double figures and only two of them were starters. In 39 minutes, Irving scored 37 points, grabbed six boards and dished out seven assists. What’s crazy about this stat line is that Kyrie didn’t even have his jersey untucked. Irving is known to have magnificent outings like his 40-point game against the Philadelphia 76ers on Christmas day.

The other starter who went off was none other than second-year stud Jayson Tatum. The former Duke star dropped 26 points in 38-minutes. Tatum was one point shy from tying his career-high.

☘️ @jaytatum0 scores 26 PTS and comes up clutch down the stretch in the @celtics Game 2 W! #Celtics #NBAPlayoffs pic.twitter.com/YrDHmjqF9V

13 points were provided off the bench by Gordon Hayward along with five solid rebounds.

Indiana led at the start of the fourth 79-68 but there’s no other way to put this, Indiana’s offense completely collapsed in the fourth quarter. Kyrie started to hit fadeaway jumpers along with Tatum. They both took the reigns and seized their advantage off of the Pacers crucial turnovers.

Following an Indiana miss, Tatum knocked down a three-pointer to take the lead and Horford later blocked Bogdanovic underneath the rim. Horford was a game-time decision yet scored four points and amounted 10 important rebounds.

Tonight's Play of the Game is a spectacular glimpse at the team-oriented play that stole the game away from Indiana late in the fourth! pic.twitter.com/PxrYCplGxb

Game 3 is this Friday in Indiana for the first time this series on ABC at 8:30 PM

Recent grad from the University of Florida. Editing all articles on here while helping out the newbies. Love all things basketball.
@@MarcoJMartinez_
Previous Houston Rockets cruise 118-98 in Game 2 win versus the Utah Jazz
Next Tampa Bay Rays continue to be one of the hottest teams in baseball