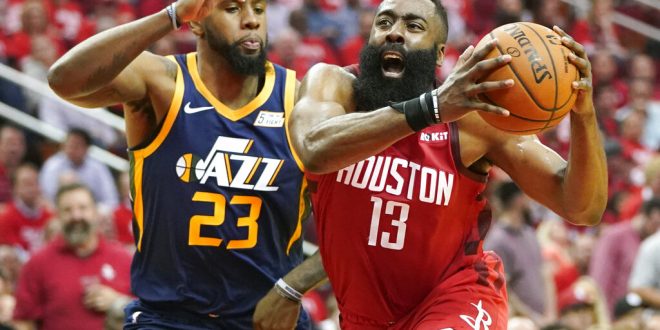 James Harden had another MVP-caliber performance against the Utah Jazz last night, producing a triple-double (32 PTS, 13 REB, 10 AST) in a 118-98 Houston Rockets Game 2 win on Wednesday night. Houston avoided déjà vu at the Toyota Center, making the first-round matchup 2-0 instead of losing the second game after a dominant Game 1 like last season’s second-round matchup.

Houston is trying to write a new chapter, confident that they are at least better than last year’s team. Last year’s team lost in Game 2 versus Utah despite a big win to open the second-round series. Even after winning that series in five games, Houston could not get past the Golden State Warriors, losing in seven games.

“We’re as good as anybody, if not better than everybody,” Rockets coach Mike D’Antoni said.

P.J. Tucker repeated the same type of confidence after the game:

“When we do what we do, I don’t think anybody can beat us. And that’s a fact, I don’t care. If we come out and communicate and when our guys get going and are aggressive, we’re tough.”

A big factor in that statement is the team aiming to have its peak performances during the playoffs. It showed last night.

D’Antoni’s team nearly replicated the scoreline from the last regular-season meeting between the teams—a 125-98 win. Beforehand, the Rockets lost 2 of 3 games, winning the third game 102-97. However, Harden and company were cookin’. Houston shot over 47 percent from the field and over 40 percent from three, adding up 70 points in the first half. In just the first quarter, the Rockets scored 6 of 13 3-pointers, outscoring the Jazz 39-19.

On the other hand, Utah players felt like they did not bring their A-game.

The sophomore had only 11 points on 5 of 19 shooting, had four turnovers and missed both his free-throw attempts. Rudy Gobert had 12 points and 11 rebounds, but his defensive abilities were limited with Houston preferring scoring from the perimeter. Additionally, Utah shot 8 of 38 from beyond the arc.

It was not all bad for the Jazz, as small forward Royce O’Neale was in a groove offensively, scoring 17 points off 7 of 10 shooting (3 of 6 from three-point land). Nevertheless, Utah will need to be a lot more efficient on both sides of the court to get back into this series.

The series transitions to Vivint Smart Home Arena in Salt Lake City, Utah for Game 3 on Saturday night. Game 4 will also be in Utah on Monday night.