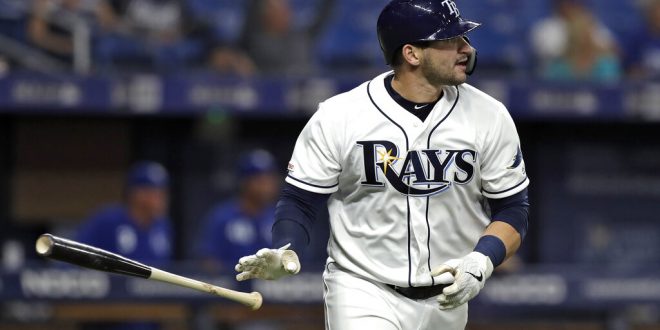 Rays Rally Against the Royals

The Tampa Bay Rays picked up a nice win against the Kansas City Royals. They needed this win to break their four-game losing streak.

Tampa Bay successfully defeated Kansas City 6-3 to take the first game in their series. This win ended a 4-game losing streak, their longest this season. The Rays’ whole series against the Red Sox was close. They were down by a total of 4 runs across the three games.

The way in which they won this game was special. The game was tied up at the top of the 7th inning. Former Florida Gator Mike Zunino hit a two-run homer, his first for the franchise. This was also three days after the birth of his first child, Rhett.

Unfortunately for the Royals, this game was the 9th time this season they have lost a game after having the lead through the sixth inning. At 7-16, they have the worst record in the American League. On the other side of the league, the Rays are at the top with a 15-8 record. They had only suffered one loss per series up until playing the reigning World Series champions last week.

Tampa Bay catcher Mike Zunino was only three days back in the game when he had the biggest moment of his career with the Rays. Zunino missed three games while on the paternity list for the birth of his first child, Rhett Michael Zunino.

“Man, I didn’t promise that, but I’ll definitely take it,” Zunino said. “You know, that was a very special moment in life and my baseball career. It’s something I’ll never forget.”

Zunino had a legendary career at Florida. He was the third overall pick in the 2012 MLB Draft, the highest in school history. After playing for the Mariners for six seasons, Zunino was traded to the Rays, where he has made an impact. Although it is early in the season, the Rays have already put themselves in a good position to be in the playoff conversation.

3rd-year Telecommunications student at the University of Florida. Also a member of the Women's Track and Field team.
Previous What Will Tampa Bay do with No. 5 Pick?
Next The Greek Freak Leads the Bucks to Advance to the Second Round