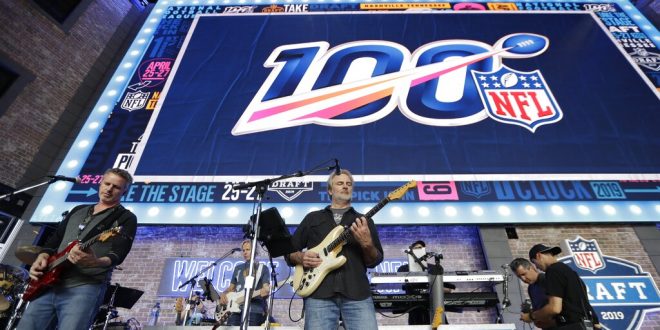 The band Sixwire rehearses on the NFL stage ahead of the first-round NFL Draft, Wednesday, April 24, 2019, in Nashville, Tenn. The football draft is scheduled to run Thursday through Saturday. (AP Photo/Mark Humphrey)

All eyes will be on the music city as the 2019 NFL Draft will be held for the next three days.

Young players showcase their talent in the months leading up to the draft in the hopes they hear their name called at some point, Nick Bosa, Quinnen Williams and Josh Allen are just a few players projected to be taken in the first few picks of this year’s draft but what everyone wants to know is where is the 2019 Heisman Trophy winner, Kyler Murray going to land.

Teams to watch for in the first round.

It has been known for a while that John Gruden and the Oakland Raiders have been preparing for this draft. The Raiders traded their star receiver Amari Cooper to the Dallas Cowboys for a first round pick and also were able to acquire two other first round picks.

Oakland has the 4th the 24th and the 27th pick this year and everyone is eager to see who they bring on to play alongside Antonio Brown.

The Arizona Cardinals are another team to keep an eye on in the draft. After a disappointing 3-13 record this past season the Cardinals will look to turn things around with the first pick in this year’s draft.

Arizona alongside Oakland have been the most talked teams in this years draft. Everyone is wondering whether the Cardinals will take Kyler Murray or Nick Bosa at number one. Defensive end Nick Bosa sat out his last year at Ohio State in order to prepare for the draft. Bosa is seen as the best overall player in this draft and the Cardinals would be insane in not considering him.

Then again, after the not so great year Josh Rosen had the Cardinals are more than likely to take a quarterback.

Head coach of the Cardinals, Kliff Kingsbury is a huge fan on Kyler Murray as they have known each other for about seven years now. Kingsbury was the one who recruited Murray to Oklahoma and the rest is history. It no secret that the two of them will pair well together but will the Cardinals pass up on an impact player on defense such as Nick Bosa.

Take a look at many of the prominent mock draft choices heading into tonight's first round.https://t.co/QwqHlFzYKF

Players to watch for