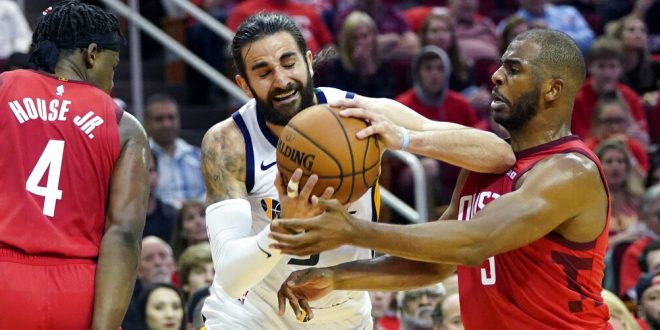 All the Houston Rockets needed was five games to send the Utah Jazz packing and headed for home. Meanwhile, Houston now moves on to the Western Conference Semifinals.

There, they wait for the winner of the Golden State Warriors and Los Angeles Clippers series which is now at 3-2 in favor of the Warriors as the series shifts back to L.A.

The best of seven contest started strong for the Rockets, led by NBA super-star, James Harden. The Rockets hosted the first two games of the series and defeated the Jazz in dominating fashion.

With two quick wins under their belt, Houston was firing on all cylinders and feeling great as the series shifted to Utah.

Game 3 was not as defining, however, for the Rockets. The Jazz, down 2-0 in the series at this point, came out in front of their home crowd and made it a close series, for at least the first half of the third game, taking a 55-50 lead into the half.

However, that lead would not last long as Houston came out in the second half and found their mojo. Although much closer than the other two games, the Rockets also took Game 3 in Salt Lake City by a score of 104-101.

In Game 4 the Jazz finally played good enough basketball to pick up a win over the Rockets and picked up a  107-91 win at home to make the series even just a little more interesting at 3-1 in Houston’s favor.

Houston was up and down and all over the place in the Wednesday night elimination game. The Jazz were playing great defense and the Rockets were struggling from the field. At halftime, the Rockets led by just four points.

Utah continued to play a great game but just could not keep up with a Houston offense that was heating up. Houston Guard James Harden finished the game with a team-high 26-points in the Rockets 100-93 win over the Jazz. The win made the series 4-1 with the Rockets advancing to the Western Conference semifinals.

Now, Houston awaits the winner of the Golden State Warriors and L.A. Clippers series, with many expecting a showdown with Golden State. The Warriors are currently leading the series 3-2 over the Clippers. So, as the series now heads to Los Angeles the Clippers will be hoping to take this thing all the way to seven games. Game 6 of that series tips off tomorrow at 10 p.m. EST.

The semifinal series will certainly feature Houston, but which California team will be joining them? Rockets center Clint Capela made it known that he’s ready for a dance with the Warriors.

“That’s what I want. I want to face them,” Capela said in the postgame press conference.

Previous Will Josh Rosen be a Cardinal next year?
Next Clippers Force Game 6 Against Golden State