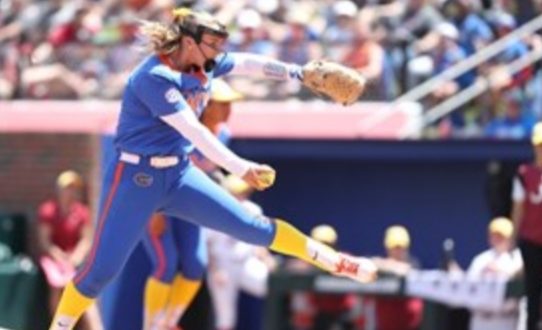 A little over a month after reaching the 1,000 strikeout threshold, Barnhill sits atop the leaderboard in another major category: career strikeouts.

Barnhill needed only 5 strikeouts to tie Stacey Nelson at 1,116 coming into the game.

She earned double that amount with 10. She broke the mark after sitting down Auburn’s Makenna Dowell to end the 4th inning.

Barnhill didn’t stop there and struck out the side in the 5th and even ended the game with a second punchout of Dowell.

Additionally, the Tigers came into the game with one of the lowest strikeout rates against SEC teams.

Barnhill also added to a program record she previously set with her no-hitter Friday night. Her first no-no of the season now gives her eight for her career at Florida.

Florida took advantage of an Auburn team that is tied for 11th in home runs allowed to SEC teams. Twenty three of its overall 33 come against conference opponents.

Lorenz got the scoring started with a three-run blast to left field in the 2nd to give Florida a 3-0 lead.

The Gators added on later in the game thanks to an error in the 4th and a Jade Caraway single in the 6th to make it 5-0.

Jaimie Hoover capped the scoring on the night with a two-run shot in the final frame to put a bow on the 7-0 win.

Auburn has one of the worst team earned run averages against league opponents at 4.63. That’s tied for 11th in the conference.

Florida is back in action for game 2 of this series on Saturday starting at 2 p.m.

Fans can watch the game on ESPN 2.