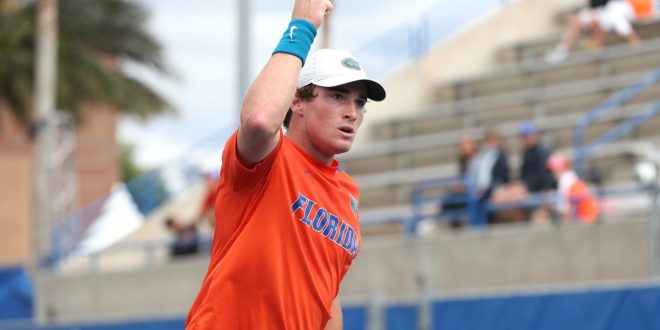 Captain Oliver Crawford throws his fist in the air as he celebrates a singles match win against Tennessee in the SEC Tournament. The win guaranteed the sophomore a spot on the SEC All-Tournament team.

It’s scary to think that a team ranked fourth in the nation can only get better, but that’s exactly where this team stands. Heading into the NCAA Tournament, the Gators Men’s Tennis team has the opportunity to start a dynasty. 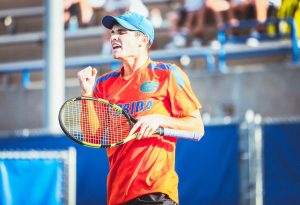 The Gators got off to slow start to the season dropping two of their three matches at the National Indoor Championship. The players used this as motivation to get back on track for conference play.

Florida would go undefeated in conference play, a perfect 12-0, en route to their first SEC regular-season championship since 2003. Freshman Sam Riffice would help lead this charge as he had a perfect record in conference singles matches.

The Gators were so dominant in their conference that they would win every regular season match, other than indoors, by at least three points. Listen in to what senior McClain Kessler has to say about this season as his career comes to a close.

With eight out of 11 players on this team being underclassmen, the Gators have the potential to be a force for years to come. Lukas Greif and Riffice were named to the SEC All-Freshman team, sophomore Oliver Crawford is an All-SEC first-team selection and Andy Andrade was named to the second team. In addition, Riffice was named the SEC Freshman of the year.

An important piece to this team is where its leadership comes from. Yes, they have a strong veteran presence, but the team has two underclassmen as captains leading the way. The coaching staff tabbed Crawford and Riffice as co-captains at the beginning of the season. 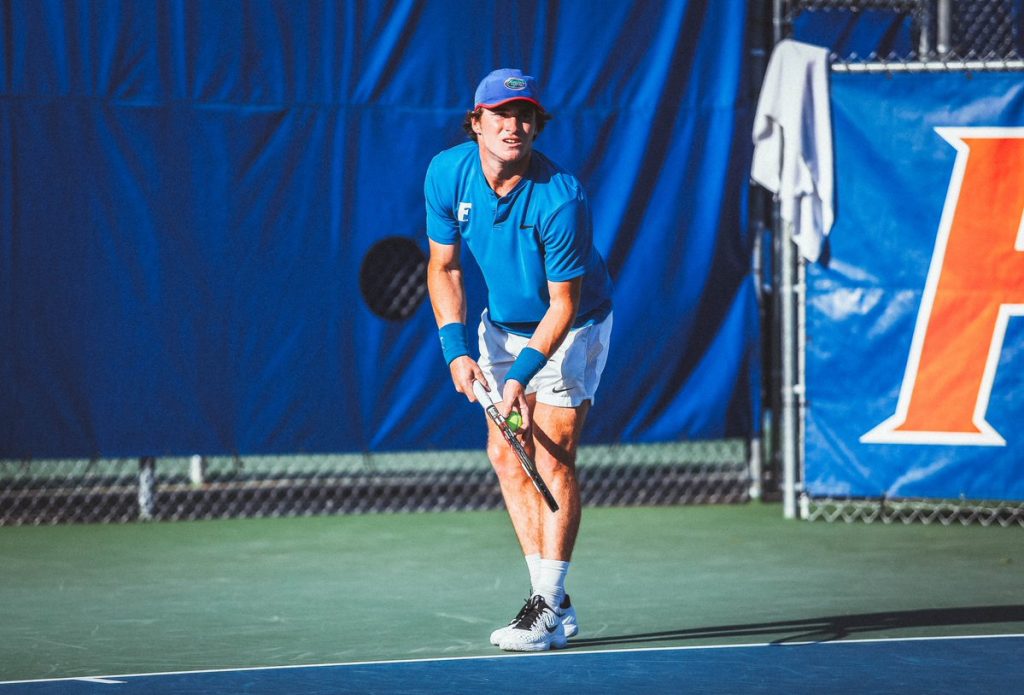 “It’s a very big honor to be considered a captain at a young age,” Crawford said. “I take it with pride and I just try to do my best to lead the guys in the right direction, not necessarily babysit them but give them advice when they need it or when they come to me.”

Kessler talks about how this team is such a tightly knit group. Even in a sport that focuses on the individual, this group emphasizes the team aspect. He goes on about the heights this team can reach if they stick together.

The Gators headed into the SEC tournament steamrolling over its opponents and even got a chance to host the tournament. Unfortunately, they suffered an early round exit in front of the home crowd.

Crawford says the loss will be motivation for the team. It’s something he feels will help the team prepare for the NCAA Tournament. He mentions that the team got better after the early season loses and hopes the same happens following this one.

Push each other even deeper & bounce back. pic.twitter.com/BOXx9BSclw

Crawford continues about how the team will work even harder to correct their mistakes for the final push. With the NCAA Tournament around the corner, the captain knows he’s got his team in the right mentality. 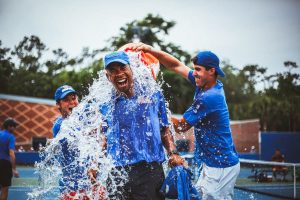 Leading this team and program is Head Coach Bryan Shelton. He took over the team in 2013 and has improved the Gators record almost every season. He now has a legitimate shot at a national title.

Shelton was named the SEC Coach of the Year, his second time winning the award (his first was back in 2016 when the Gators were SEC Tournament champions). Under his guidance, Florida won 16 matches over ranked opponents this year and was ranked as high as No. 2 for the first time since 2006.

Take a listen to the rest of Kessler’s interview and what he has to say about his coach as he closes the final chapter on his storied career.

With a coach at the helm that receives as much praise as Shelton, it’s understandable why so many young top recruits come to the university. It’s the young kids buying into the program early on that builds a precedent of success.

We hear you, Coach. ✊#GoGators pic.twitter.com/Fp02TUCFUT

This team wants the recognition around campus that many other athletes get. Being able to go far in the tournament this year will mean something, but it will almost feel like they came up short. With a dynasty possible coming and the team set up for success to win it all this year, there could be no telling how good this team really is.

After winning the 2021 NCAA Championships, the Gators men’s tennis team are coming in hot …