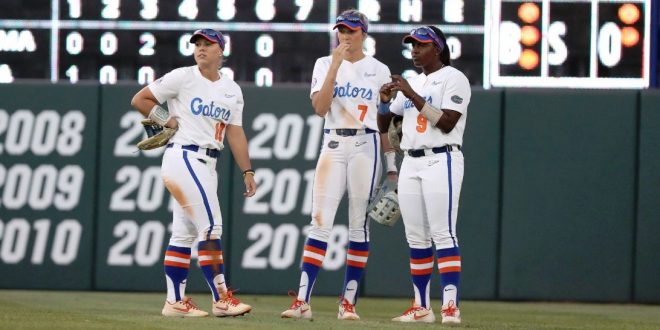 As thousands of Gator careers end with graduation over the weekend, Florida softball’s regular season also comes to a close.

UF enters the weekend after earning a series win over the 19th-ranked Auburn Tigers. It was Florida’s first road series win against a ranked SEC team.

Including 2019, this senior class has seen 209 wins to 41 losses with potentially plenty of games left to play. This will be the only season they will see less than 20 SEC wins.

Mann, Swertfager and Voss made their mark as role players for Tim Walton’s teams. Voss provided valuable defense in the outfield and paired with Mann as a key pinch runner. All three earned SEC Academic Honor Roll their first three years.

Lorenz and Barnhill made an impact the first year they set foot on campus. They hold a host of records between the two of them.

Lorenz has been a first day starter for Walton and has yet to miss a game. She will likely hold the crown for career batting average and on-base percentage when her time is up.

Regardless of the season’s end, Barnhill will finish as Florida’s all-time strikeouts leader and likely the career leader in earned run average.

Mississippi State enters the weekend off a sweep of the Missouri Tigers in Starkville. Vann Stuedeman’s team sits next to last in the conference standings. But they still boast the 10th-best strength of schedule in the land.

The Bulldogs are a scary team at the plate; their offense ranks near the top in the SEC for in-conference batting average, slugging percentage and home runs.

A player to watch for the Bulldogs is sophomore Mia Davidson. She can be found in the top 10 in most individual categories including fifth in batting average (.408).

If you like homers then you’ll love Davidson, she’s first in the league in slugging (.993) and first in home runs (25). Against SEC opponents Davidson is third in home runs with eight and her .687 slugging percentage is 12th.

This could be trouble for a Florida pitching staff that’s allowed 20 homers to SEC teams as Davidson has a chance to break the career home runs record at MSU and the SEC single-season record.

Not to be outdone is Fa Leilua. The junior utility player’s .379 average is sixth-best against conference opponents and she’s slugging better than Davidson at .788. She even has 13 extra-base hits in SEC play. Leilua paces MSU in all these categories in SEC play with these numbers.

Emily Williams is the anchor of the Bulldogs’ rotation. She’s 11-7 with a 2.34 ERA overall but has a 2.14 ERA against SEC teams. A big problem she’s had of late are walks. She has a 1:2 strikeout to walk ratio in conference play including two double-digit walk performances.

However, her 125 total strikeouts on the season place her seventh among SEC pitchers.

All three games can be streamed on SEC Network+; Friday and Saturday’s games begin at 6 pm while Sunday’s is slotted for 1:30 pm.