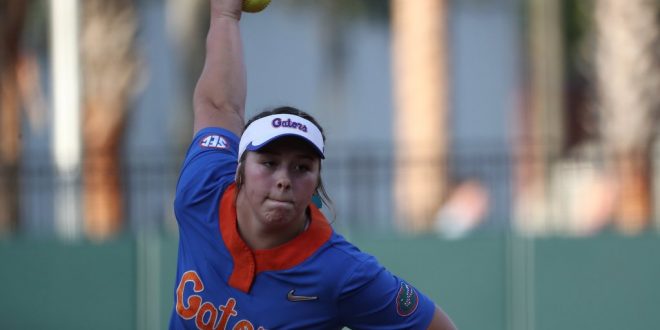 Florida did not start graduation weekend in the best way. The seventh-ranked Gators dropped the series opener with Mississippi State 6-4 Friday night.

The loss could have already sealed the Gators’ fate in terms of nabbing a top-eight seed for the postseason.

The Bulldogs were all over Kelly Barnhill from the start.

Fa Leilua gave her team an early lead with a two-run moonshot to left center field. She even waved it goodbye as it re-entered the atmosphere behind the scoreboard.

Florida was able to cut the lead in half in the bottom of the inning thanks to a quartet of walks. MSU responded in the second with another two-run homer this time by Sarai Niu.

The Bulldogs would add a run in the second and another in the third but were held in check the rest of the game.

After a shaky first inning of relief, Lugo shut down the Bulldogs the rest of the way. She finished with one earned run on three hits, six strikeouts through four and two-thirds innings.

Late Comeback and a Delay

Florida didn’t score its second run until the seventh inning.

Jordan Roberts and Hannah Adams walked with the bases loaded to cut the lead to 6-3.

Jaimie Hoover came to the plate with the tying run on first base. After one pitch Mother Nature intervened.

The game wouldn’t resume for almost 90 minutes. When it did, Hoover earned a walk to make it 6-4. But, Florida couldn’t finish the comeback as Cheyenne Lindsey looked at strike three with the bases load to end the contest.

State’s Emily Williams pitched a complete game on over 150 pitches collecting four strikeouts and 12 walks. Those 12 free passes are a season-high for Florida.

Florida is back in action on Saturday with a doubleheader. It will be honoring the seniors during the festivities.