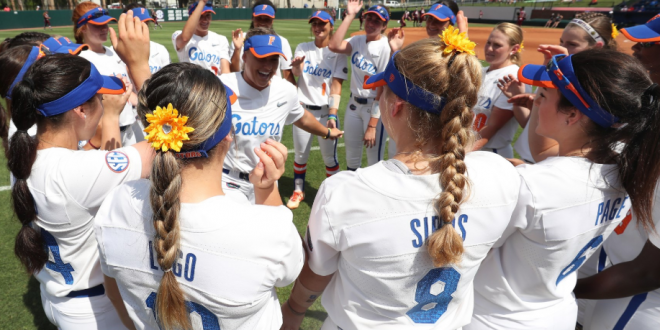 The ninth-ranked Florida Gators start the SEC Tournament on Wednesday at 1:30 p.m. against the number 20 South Carolina Gamecocks. The winner of this matchup moves on to face the three-seed LSU Tigers.

This is just the third time in program history the Gators are slotted at No. 6 in the tournament. It is the first time Florida is in the opening round since the SEC added it after expanding in 2013.

It’s a rematch of the 2018 SEC Tournament championship round. Florida edged out Beverly Smith’s squad by a score of 3-1 then.

Additionally, these teams met in Gainesville in the 2018 regular season. Tim Walton’s squad swept the 11th-ranked Gamecocks out of Katie Seashole Pressly Stadium and allowed just one run over all three games.

South Carolina’s win total is down from a year ago but it still maintains a Top 25 ranking. The Gamecocks enter Wednesday 6-4 in their last 10 games while Florida enters 4-6.

Overall, South Carolina is one of the best offensive teams in the conference. Carolina is in the top five in batting average (.305), slugging percentage (.535), on-base percentage (.408) and home runs (71).

But, those numbers dipped in SEC play. The Gamecocks are around the middle of the pack in the aforementioned categories and have only a slight lead over Florida in runs scored against league opponents.

The team’s lone All-SEC player in Jana Johns posted a .662 slugging percentage and got on a .483 clip against SEC teams. Another player to watch is Karly Heath. She’s a utility player who has a team-best 2.48 ERA. However, most of the action she saw and the numbers she put up came against non-conference opponents.

Lorenz and Lindaman were Florida’s main source of offense in 2019. They combined for a .346 average and both boast an OPS over 1.100 in the SEC. Lorenz had an unbelievable year at the plate in SEC play hitting .444, slugged .841 and got on base at .609 percentage.

Barnhill led the league in strikeouts (131) and innings pitched (113.1) in-conference with a .184 batting average against. Her fellow pitcher Elizabeth Hightower was selected to the All-Freshman team. She posted a 1.74 ERA and a .220 BAA over 40 innings of work in the conference.