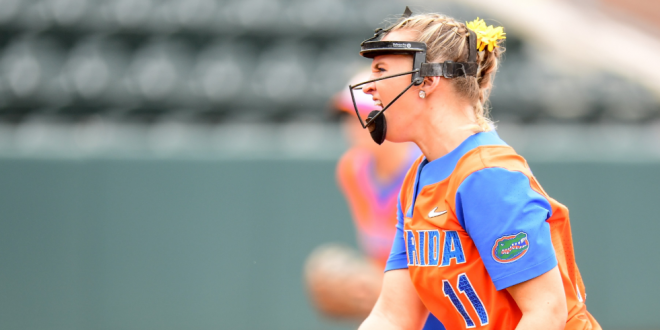 Early success at the plate and Kelly Barnhill were the magic ingredients to Florida’s SEC Softball Tournament win on Friday.

Barnhill pitched her second straight shutout and Hannah Adams had two clutch hits as Florida defeated the Auburn Tigers 3-0. The Gators now have the chance to defend its tournament crown in the final on Saturday night.

A win on Saturday could bolster Florida’s resume for a strong case of receiving a top eight national seed for regional and super regional play. Secondly, it would make Florida the first back-to-back tournament champion since Auburn in 2015 and 2016.

“I love being up here every day and someone new stepped up here for the Gators and contributed to the W,” Gator head coach Tim Walton said.

The Gators once again took the lead in the first inning and didn’t look back. This time it was  Adams showing some pop with a two-run dinger against the Auburn lefty Chardonnay Harris. They were the first runs Auburn gave up in 14.1 innings of work in the tournament.

We're going to the CHAMPIONSHIP!! Barnhill tosses her second straight shutout and Adams drives in all three runs to send us to the the SHIP! #GoGators pic.twitter.com/oUp7ezL0VT

It was her third round-tripper of the season, matching her freshman year total. She’d continue in the third with an RBI single to score Amanda Lorenz from second base. Adams finished 2-for-3 with three RBIs and a run scored.

“It’s nice to cheer for Hannah Adams and see her smiling and running around the bases, getting big hits for the team,” Walton said. “She’s really been working hard and has been hitting some balls hard, she just hadn’t had a lot to show for it.”

Lexie Handley relieved Harris in the third and retired the last 11 batters in a row. Eight Florida batters went hitless and seven couldn’t reach base. However, Walton said he thought the team hit the ball hard but didn’t have anything to show for it.

Furthermore, Walton said his hitters’ uptick in confidence has led to the production the Gators have seen as of late.

“I think overall it’s just confidence breeds confidence, it keeps on moving and you can see it,” Walton said. “No matter what, we play another ranked team tomorrow, we’ve played a ton of them, and I think our hitters are just really swinging the bat with confidence.”

Florida’s ace continued her dominance with a second straight complete-game shutout. She built off her one-hitter against LSU and recorded 11 strikeouts to two walks with two hits allowed on just 92 pitches.

She took advantage of a team that entered the game hitting .226 in its first two tourney games as she started with eight straight outs. Walton said Barnhill set the tone for Florida on Friday.

Barnhill’s 11 Ks puts her over 300 for the third straight season. She is now the only player in Florida softball history with three season of 300+ punch outs.

Her 12th shutout and 24th complete game this season tied her with Chelsey Sakizzie for fourth all-time in complete games (71) and passes Hannah Rogers for number two all-time in shutouts with 42.

“I was just really confident in my pitches today,” Barnhill said. “I had Jordan (Roberts) behind the plate and she was holding me accountable for hitting my spots. I just kind of went at them, threw my best pitches and hit the corners well.”

Florida will have it’s third straight rematch as they meet Alabama in the SEC Tournament championship round Saturday night. Fans can watch on ESPN2 at 8 p.m. ET.