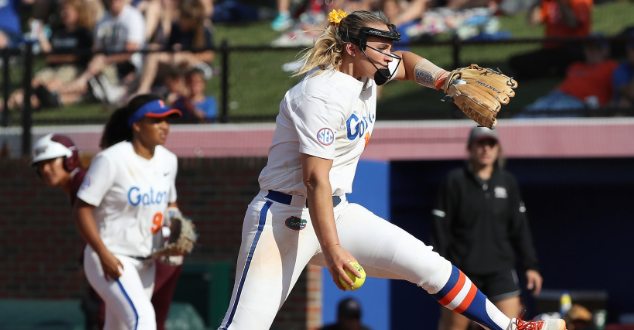 A few timely hits and a great day from Kelly Barnhill has Florida one win away from SEC Tournament championship.

The ninth-ranked Gators defeated the number 10 LSU Tigers 3-0 in order to advance to the semifinal round of the SEC Tournament.

Florida’s national seeding and the chance of hosting a super regional are still unknown. A deep run in the tournament or even a championship could serve as a resume item for the selections committee.

Tim Walton’s team scored early and rode the arm of Kelly Barnhill to nab the victory.

We're moving on to the semi-finals thanks to a one-hit shutout from Kelly Barnhill❗#GoGators pic.twitter.com/5sLW68Tl1q

Amanda Lorenz got it going early with a leadoff double. Jordan Roberts drove her home with a two-out single to take a 1-0 lead in the top of the first.

They’d keep it up in the second inning as Sophia Reynoso led off with a single and stole second seemingly right after. After a Hannah Sipos walk, Florida loaded the bases when LSU shortstop Amber Serrett and third baseman Amanda Sanchez failed to connect on a fielder’s choice.

The lineup then flipped back over to Lorenz. She singled to right field to bring home Reynoso.

Kendyl Lindaman reached on a fielder’s choice and advanced to second on a throwing error by Sanchez. The play allowed Sipos to score from third.

After going 0-for-4 against South Carolina, Lorenz responded with a 3-for-4 performance including a run scored and an RBI.

Reynoso is 3-for-7 with an RBI two runs scored after going 2-for-9 against Mississippi State in the final regular-season series.

Who Else But Kelly?

Shelbi Sunseri settled down after the second and Florida wouldn’t score another run the rest of the game. It wouldn’t need to the way Barnhill performed.

One-hitter with 7 Ks to lead @GatorsSB to a 3-0 victory over LSU. pic.twitter.com/c5elLMD0bR

Barnhill, who was Florida’s horse all regular season, had the day off for the first game of the tournament.

That seemed to work as she shoved for the Gators on Thursday.

She allowed one hit in a complete-game shutout of the Tigers and recorded seven strikeouts to one walk. She struck out six and walked five against LSU last time on Mar. 18.

It was Barnhill’s 11th shutout and her sixth appearance allowing one hit this season. Also, she matched her 2018 complete game total of 23 with the win.

Florida will have another rematch in the semifinal round. It faces the Auburn Tigers at 4:30 p.m. on Friday. The Gators took two out of three in Auburn in the regular season.