Alicia Boren may have finished her last routine ever for the Florida Gators Gymnastics team, but the legacy she leaves behind is impressive. Alicia finished her senior season by earning a share of the National Championship in the NCAA Gymnastics Championships’ floor exercise. By doing so Alicia claimed the 20th NCAA individual event title for the Gators Women’s Gymnastics squad. Boren was the rock of the team this past season and was known for always putting on a show for Gator fans during her floor exercises. Boren’s career has been filled with success. She is a finalist for the AAI Award which is given to the nation’s top senior gymnast.

The sport of gymnastics has opened so many doors for Boren and she can’t be more thankful to have decided to become a gymnast. Sports are a way to connect with others and build relationships and Boren epitomizes what it means to be a true student-athlete. She has been an All-SEC Academic team recipient multiple times, but Alicia is more than just a gymnast. She looks out for others and wants nothing but success for herself and her peers.

Throughout the season at the team’s meets, Boren has really grown into a leader for the Gators. Known for being a shy individual when she first got to UF, Boren used gymnastics as a platform to branch out more. After speaking with teammates, Trinity Thomas and Jazmyn Foberg, it is evident that Alicia has the qualities of a leader. Both Thomas and Foberg mention how Alicia is more than just a teammate and someone that they can rely on both on and off the floor.

What’s Next for Boren

Boren mentions wanting to keep using her athletic ability to continue to do what she loves. She plans to audition for Cirque du Soleil soon. For a young lady of her physical nature and competitive spirit, there is nothing stopping her. She leaves quite the legacy at UF and her teammates, family, and friends can’t thank her enough for all she did for UF. She has laid the foundation for what it takes to be a national champion and all the team should be excited to pick up where she left off. 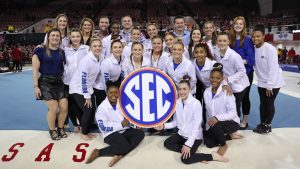 For those who were not able to learn about Boren or follow her career, check out her Twitter profile and a video of one of her several amazing routines. Boren always brought the heat to her competitions and always made sure to get the crowd on their feet during her floor performances.

Not everyone knows about the precision and work ethic it takes to be a successful gymnast. One small fault during a routine can cost the entire team their chances of winning. Though she is known for her floor routine she is able to succeed in all aspects, including the beam. Alicia Boren has demonstrated the effort it takes to be a complete individual inside and out.