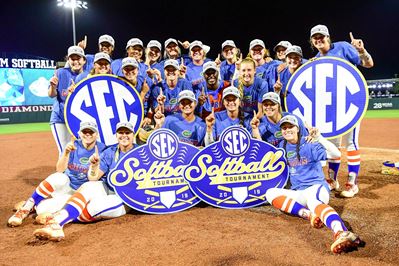 “Our players not only did a really good job of staying focused, but did what they needed to do to stay in tune in the rain delay game on Wednesday, and just doing everything necessary to regroup each and every day when we had a new opponent,” Walton said.

Barnhill is going to need an icepack after this week. The senior made her third start in three days on Saturday.

She didn’t look as the sharp as in the last two starts but pitched well enough for the win. It the 100th win of her career, something only two other pitchers accomplished for Florida.

The Georgia native had a complete game with six strikeouts, two hits, six walks and one run allowed on 140 pitches to cap off an MVP performance.

She said the biggest difference during the tournament was her being able to hit her spots.

It results in more command and a better outcome when she’s able to locate.

“Kelly Barnhill did a fabulous job the whole entire week, against really good hitting teams and used her defense when she needed to,” Walton said. “No bigger strikeout than the last strikeout of the game, just a fabulous pitch.”

Here it is! The final out that crowned the Gators CHAMPIONS!! #SECSB #GoGators pic.twitter.com/gVSwvO8s2N

Mandy Softball Does It Again

Florida couldn’t get much against Krystal Goodman and Montana Fouts for most of the game.

Walton made the move in the six inning to have Cheyenne Lindsey pinch hit for Hannah Sipos with two outs and trailing 1-0. She slapped the first pitch she saw over the third baseman’s head and down the left field line for a double.

Jordan Matthews came in next to pinch hit for Alex Voss. She’d earn a walk on a foul count and be replaced on the paths by Voss.

Then Florida’s senior sparkplug Amanda Lorenz came to the plate. After working the count full, she hooked a double to the opposite field to score both runners to give Florida a 2-1 lead.

Here's the CLUTCH 2-out double from Amanda Lorenz to score the go-ahead run in the 6th! #GoGators #SECSB pic.twitter.com/geMgocHgnP

Walton said he spoke with Lorenz prior to her stepping into the box.

“Sure enough she delivered big time, so I’m really proud of not only her effort but being able to regroup after the time before,” he said.

“This is building confidence for the team. We’re getting hot at the right time,” Barnhill said. “You never want to peak too early and I think this is the time you want to really bring all of your good stuff.”

Walton said he’s excited to get ready for regional play next weekend. He said he’d be “remiss” not to mention the performance of Matthews Wednesday night citing “we wouldn’t be here without that.”

Lorenz said everyone in the lineup contributed and there wasn’t really one person who stole the show hitting wise. She thinks this week shows her team is firing on all cylinders.

Her, Barnhill, Hannah Adams and Sophia Reynoso were all named to the All-Tournament team.

“I just love all of my teammates so much, so to go out like this in my senior year with them by my side is really exciting. I’ve enjoyed every second of it,” she said.

The Gators will found their seeding during the selections show Sunday night at 9 on ESPN2.

Previous FEATURE: The Sports Trading Card Industry is Fueled by the Digital Age
Next Gators Earn the No. 5 National Seed