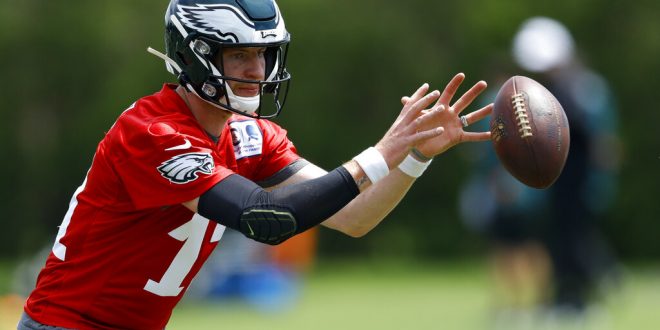 The Philadelphia Eagles’ quarterback Carson Wentz is excited to be back in practice with his team. After missing 8 games in the last 2 seasons, he is optimistic about his rehab process and is ready to start this season.

Wentz joined the Eagles in 2016 when they selected him on the first round as a second overall pick. After trading Sam Bradford back to the Vikings in 2016, Wentz became the Eagles’ starter making his debut against the Cleveland Browns on September.

He threw 278 for passing yards and 2 touchdowns to get the Eagles’ victory and was named Pepsi NFL Rookie of the Week.

On week 14 of his 2017 season, Wentz had to leave the game against the Rams due to an apparent knee injury. This was later confirmed by an MRI showing that he had torn his ACL on his left knee. He went through successful surgery but was still kept off the field in order to help his recovery.

Surgery ✔️ the comeback officially begins now! The Lord truly blessed me with this beautiful young lady to walk by my side and support me through all of this! #comeback #grateful pic.twitter.com/enMa1B8dyb

He missed the first two games of his 2018 season but was able to recover his starting position early on. In his first game back, he finished with 255 yards, one touchdown, and an interception to win against the Indianapolis Colts.

Near the end of the season, Wentz was dealing with a back injury so Nick Foles got the starting position while Wentz recovered.

Coming back from his injuries

Even though his injuries made him miss a few games, he still says that there are many lessons that he has been able to take away from his time in recovery.

When asked about his knee brace, he said that he was really happy to take it off and confirmed that he will not be using them for practice or for the games. He mentions that his recovery process has been full of hard work but being back with his team makes it worth it.

Carson Wentz is known for his hard work and commitment so the optimism he has kept throughout his recovery is no surprise.

But the biggest thing Wentz has taken away from this process is how it helped him grow his faith.

“For me it always challenges my faith in what I believe and surrendering that control to the Lord. That’s where I get challenged the most and grow the most is in my faith.”

Camila is a senior at the University of Florida, who served as a beat writer for the women's basketball team from 2019 until the 2021 season. She was also a beat writer for the Gators football team during the 2020 season. Camila is also WUFT's news director as well as a sports reporter/anchor.
@CamilaMaffuz
Previous Gators Softball Ready for 2019 Super Regional
Next Softball Super Regionals Begins Tonight