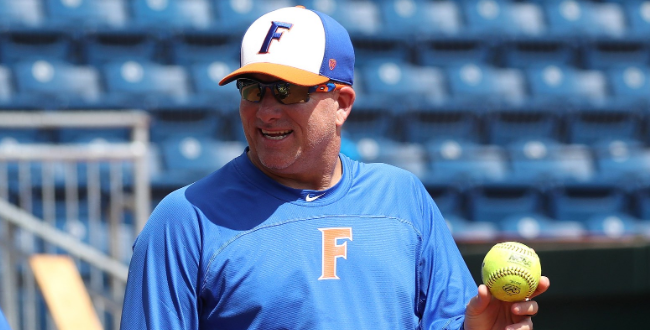 One team and two wins stand between the Florida Gators and another trip to Oklahoma City.

Tim Walton on advancing to the next round:

Five in a Row

This is Florida’s fifth consecutive Super Regional against an SEC team. The only team to eliminate the Gators was Georgia in 2016.

“It doesn’t feel like the stage is too big,” she said. “It feels like we’re used to it especially facing a familiar foe in Tennessee.”

Tennessee advanced out of the Knoxville Regional after a 2-0 win over North Carolina in game two of the final. Karen and Ralph Weekly’s team has won six of its last 10 games.

The Lady Vols are back in town #GBO pic.twitter.com/FWRJNfUDxX

Walton on the Lady Vols:

Walton mentioned Tennessee’s ability to have seven or eight left-handed hitters in the lineup. Two of those batters are All-SEC second teamers Aubrey Leach and Jenna Holcomb.

That’s an advantage against a Florida pitching staff made up mostly of right-handers.

Those left-handed batters hit a combined .330 and their 225 runs batted in account for 74 percent of the team’s season total. Furthermore, they have 100 of Tennessee’s 127 extra-base hits this season.

According to Walton, another challenge is pitching and defense. He said they boast three No. 1 pitchers. That staff is led by First Team All-SEC pitcher Ashley Rogers.

Rogers possesses a 1.87 earned run average, 198 strikeouts and a .183 batting average against on the season. Caylan Arnold also has almost 100 strikeouts in just 93 innings.

This Vols team took two of three against Florida to open up SEC play in early March. But, that was then and this is now. Walton said it matters that Tennessee performed well, but his team is in a different place now.

Florida comes in riding an eight-game winning streak fueled by timely hitting and an all-world performance by Kelly Barnhill. For Walton, a key factor is the increased contribution from players outside of the law firm of Lindaman, Barnhill and Lorenz.

“It’s the supporting cast that has to believe in themselves when you get to postseason to be really, really good,” he said.

He once again pointed to Hannah Sipos’s RBI single against Boise State Saturday that led to a run-rule win as the biggest hit that stood out to him.

Lorenz on how this happened:

Walton said the difference has been the team’s change in identity. The players understand their roles a lot better and aren’t making comparisons.

Walton on change in identity:

A player who appeared to ratchet up her intensity is Barnhill. She’s pitched in Florida’s last seven games recording 38 strikeouts, four complete games, five wins and a subatomic 0.19 ERA.

Walton said Florida’s 2019 tournament title was really the first championship Barnhill one without many contributors.  Both Walton and Barnhill agreed the workload hasn’t bothered her.

Walton on Barnhill challenging herself:

Here are the dates, times and channels for this weekend’s Super Regional action.