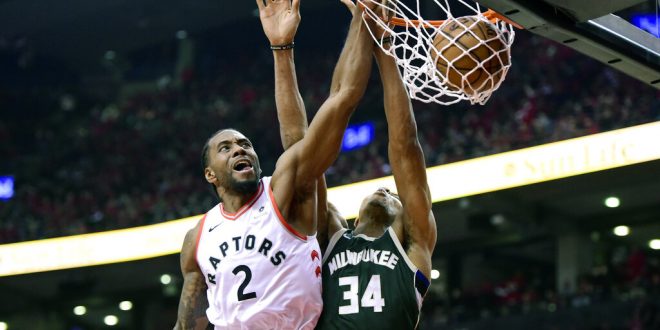 Eastern Conference Finals is Heating Up

The Milwaukee Bucks and the Toronto Raptors are the only two potential teams in the way of the Golden State Warriors from achieving a three-peat. Yet, most fans don’t really know who the best team out of the two can potentially defeat the Warriors.

At first, the Bucks seemed like they were going to sweep, or maybe at most beat the Raptors in six games after winning both games at home. However, when the Bucks arrived in Jurassic Park, aka Toronto… they transitioned from “Fear the Deer” to “Deer in Headlights.”

The series is now tied at two games apiece and the elephant in the room is more noticeable than ever: Home advantage is extremely important. Bucks won both at home and the Raptors won both. In addition, both teams have won by an average margin of 13.5 points at home. The Bucks are looking to continue that trend heading into tonight’s game.

As of this second, Milwaukee is favored by 6.5 in the latest Bucks vs. Raptors odds provided by Las Vegas betting. The Bucks came into this series with the best record in the NBA. The Bucks have only lost one game this entire post season. They haven’t lost a back-to-back since the beginning of March against the Jazz and the Suns. Get this, that was the only back-to-back loss they had in the entire season, until now.

Yes they’ve been in this situation before, but not with the Eastern Conference title at stake. So, the most important factor that plays into Game 5 is how mentally capable are the Bucks in overcoming adversity? The word of the Day inside that Bucks locker room should be “Adversity” I kid you not.

Giannis Antetokounmpo is a superstar in the making if he isn’t already, but finishing at a plus-minus of -6 in Game 3 and -18 in Game 4 is something to be concerned about. He only amounted to 12 points in Game 3 which is almost unheard of from the Greek Freak but he still managed to put up 23 rebounds on the stats sheet.

Giannis must dominate the floor on Thursday night, head to the free-throw line as much as possible, and most importantly he has to receive that extra help from the bench.

After a 120-102 blowout loss in Toronto, the biggest take was how poorly the Milwaukee bench performed and how great the Toronto bench could be.

Home court advantage has been crucial in this series, but if you think that the Bucks have this game in the bag then you’re slightly mistaken.

On top of that, the Raptors overall had their best game of the series last time out. They had more assist than the Bucks (32 to 30), knocked down more three-pointers (14 to 11) and won the rebounding battle (44 to 40).

Plus, the Raptors bench has been proving their worth before this upcoming Free Agency season. Norman Powell, Serge Ibaka, and Fred VanVleet

all dropped 10+ points. The biggest surprise has been Powell however, and not because of his points but his overall presence.

Head coach Nick Nurse had this to say about Powell after Game 2:

“I think he fits in this series a little more with his speed and strength and athleticism, his ability to take it off the bounce,” Nurse said. “We’re going to need that. It was good to get him going, and I would imagine going forward he’ll be a critical part of the series for our rotation.”

Now, another factor before going into this game was Kawhi Leonard’s status. In Game 3, Leonard landed awkwardly on a fast-break and appeared to have suffered an apparent leg or knee injury.

He’s been wincing and grimacing when he needs to accelerate and drive to the rim on key possessions. His health is a key factor to watch heading into Game 5.

Tip-off is at 8:30 tonight in Milwaukee on TNT.

The Miami Heat’s season has been over since the beginning of April and the Dwyane Wade era has officially ended in the NBA. Miami Heat assistant coach Juwan Howard felt like his time was up in the NBA as well.

Howard had this to say about his new job:

“I am very excited about the opportunity to lead the University of Michigan’s storied basketball program,” said Howard. “I have been very fortunate to be part of a great championship organization in the Miami Heat for the last nine years — three as a player and six as a coach. It was always going to take something incredibly special to for me to leave Miami; however, I know in my heart this is the right place and the right time.

Former Fab Five member Jalen Rose had this to say about Michigan’s hiring of Howard:

Michigan recently finished the 2019 season in the third round (Sweet 16) of the NCAA Tournament when they lost to the Texas Tech Red Raiders 62-44.

The Michigan Wolverines haven’t won an NCAA title since 1989 and just recently won the Big Ten Tournament in 2018.

And to top this NBA recap off, a lot of people can agree that they might’ve never thought they’d ever hear or read in their lifetime. The Bucks’ head coach Mike Budenholzer has an issue with rapper sensation Drake.

We all know that Drake is an outspoken Raptors fan and reps the city of Toronto to the grave, but he has completely transformed into the evil celebrity villain that Spike Lee once was. Drake has been seen taunting opposing players like Antetokounmpo and even high fiving all the Raptors players when they head to the bench. He’s essentially filled another assistant coach role without the pay day which is absolutely hilarious.

Drake was seen massaging head coach Nick Nurse as well which goes to show that Nurse and Drake are on a friendship-type level, they probably text each other too.

Nurse didn’t even know about the massage in the first place:

“I didn’t even know I got the shoulder rub (Tuesday) night until somebody showed me a picture of it today,” Nurse said. “I didn’t even feel it, I was so locked into the game.”

Budenholzer was asked about Drake on Wednesday and he told reporters:

“I will say, again, I see it in some timeouts, but I don’t know of any person that’s attending the game that isn’t a participant in the game a coach – I’m sorry, a player or a coach, that has access to the court.
“I don’t know how much he’s on the court. It sounds like you guys are saying it’s more than I realize. There’s certainly no place for fans and, you know, whatever it is exactly that Drake is for the Toronto Raptors.
“To be on the court, there’s boundaries and lines for a reason, and like I said, the league is usually pretty good at being on top of stuff like that.”

Drake responded to these comments by posting a picture on Instagram with him celebrating courtside and just emojis:

“If you don’t want the opposing team to celebrate and dance, prevent them from scoring, winning, or achieving their objective. Get over it and keep moving.”

Recent grad from the University of Florida. Editing all articles on here while helping out the newbies. Love all things basketball.
@@MarcoJMartinez_
Previous NBA Eastern Conference Finals Heating Up
Next Roger Goodell Speaks on Marijuana use in NFL, Robert Kraft and Tyreek Hill’s Discipline