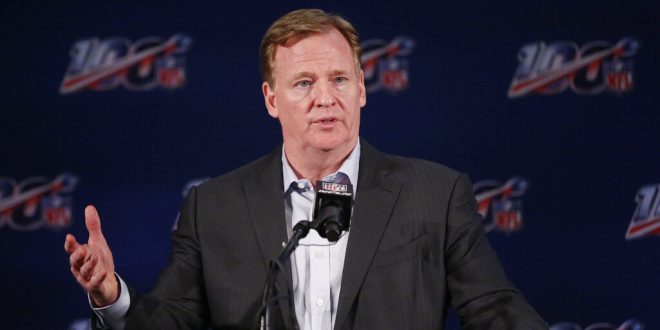 Marijuana in the future of the NFL

Commissioner Roger Goodell addressed several important topics on the state of the NFL at Wednesday’s NFL owners meeting. One issue, in particular, drew the attention of leagues and athletes around the country.

Goodell confirmed the future possibility of the NFL permitting their athletes to use medical marijuana. The NFL and the NFLPA announced the formation of two new medical committees this week. One of those committees is the pain management committee. The league and the NFLPA have agreed to work together to study marijuana as a pain-management tool for players.

He says that the research will be done along with the study of other alternative pain-relief methods.  They will observe how the use of medical marijuana affects the performance, condition, and health of the players at wide. Based on data, the league will consider the option for players as a pain-management practice only.

He says the league is concerned with the condition of the athletes above all.

Marijuana remains on the NFL’s list of banned substances. If a player tests positive for it, they can still be disciplined. Although Goodell was noncommittal on the possible use of marijuana in the future of the league, the conversation and research on it have begun.

"A watershed moment for athletes all over the country."

– Sal Paolantonio on the impact of Roger Goodell saying the NFL and NFLPA will reportedly look into marijuana as a potential pain-management tool pic.twitter.com/4JGRYBWMIs

Goodell declines to say whether or not Kraft will be disciplined

New England Patriots owner Robert Kraft continues to go about his football-related responsibilities while facing misdemeanor charges for solicitation of prostitution in Florida. With the criminal case against Kraft on the verge of falling apart, Goodell declined to confirm whether or not the NFL will punish him based on its personal conduct policy.

Kraft declined a plea deal, and his legal team won a big victory in court when the judge excluded video evidence of Kraft at a day spa. Goodell will still have the power to punish Kraft with suspension or a fine even if Kraft is not legally convicted of a crime. Goodell says the league will wait until the current court proceedings are over to take action.

Kraft was not available to be interviewed at Wednesday’s meeting in Key Biscayne.

NFL yet to speak with Tyreek Hill

After disturbing audio was released to the public, the investigation against Kansas City’s number one wide receiver was reopened. The audio is said to be Hill speaking to his wife, Crystal Espinosa. It includes him threatening her after she accuses him of breaking their son’s arm. Tyreek Hill is under investigation for battery and child abuse. The couple’s three-year-old son is in protective custody as the investigation continues.

Hill has denied any wrongdoing through his representatives but could face potential discipline under the NFL personal conduct code. When it is feasible, the league plans to interview Tyreek Hill.

From @nflnetwork’s live coverage: An update from Commissioner Roger Goodell on the Tyreek Hill situation. pic.twitter.com/rSmWplctFh

The Chiefs have suspended Tyreek Hill from participating in any offseason activities.