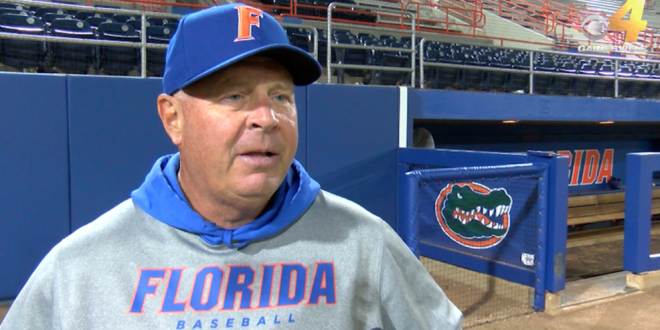 The Florida Gators baseball team will be without one of their most experienced assistant coaches in the dugout for the start of next year. After a tough ending to their disappointing season, 12-year veteran Brad Weitzel will no longer be on the coaching staff.

In the 12 years that Weitzel has worked alongside head coach Kevin O’Sullivan, they have reached the NCAA Tournament each consecutive year. He even helped the program win their first ever national title in 2017.

Weitzel’s Legacy to the Game of Baseball

Weitzel has been around baseball for most of his life. He began his collegiate baseball career in the late 1970s with Palm Beach Community College before joining the Georgia Bulldogs in 1981. His legacy in the SEC as a shortstop was short-lived but his experience in the tough conference helped him pursue a career in coaching.

Four years after his departure from collegiate baseball as a player, he coached the likes of Palm Beach Community College from 1984 to 1987. Weitzel even coached O’Sullivan when he was a member of the 1987 Jupiter (Fla.) American Legion team.

Weitzel had this to say about his hiring when interviewed by CBS4 Gainesville back in Mid 2018:

“To one day coach a kid and then eventually he hires you at a big situation like this at the University of Florida, that says a lot right there,” Weitzel said. “Every day I try to help him, and he helps me and it’s a trade off, and I’ve always felt like the big brother or uncle through that whole situation.”

Weitzel later traveled to UNF and coached for four years from 1987-1991. Weitzel served on the staff of the Ospreys’ teams which placed third in both the 1989 and 1991 National Association of Intercollegiate Athletics (NAIA) World Series in Lewiston, Idaho, according to floridagtaors.com.

He then traveled upstate to arrive in New York where he became pitching coach for the New York-Penn League’s Erie Sailors in 1990. He later had two stints with the Gulf Coast League Twins in 1996 and later in 2000. Lastly, he coached in Minnesota’s Instructional League from 1996-2001.

Weitzel’s previous role before joining Florida was being in charge of the Florida Area Scout for the Minnesota Twins. He occupied the position for 16 years.

Weitzel was iffy on coming to Florida due to his responsibilities and how much he enjoyed scouting for the Twins.

He’s scouted plenty of prosperous players, 16 big leaguers, drafted 5 and coached 36 at various levels to be in fact.

Weitzel still has a ton of connections in the MLB which is most likely where he could be headed.

There’s still no word on whether Florida has a potential replacement yet. The best potential outlook for a replacement is volunteer assistant coach Lars Davis.

Davis has been with the team for five years and was also a part of the National Championship title run in 2017.

Recent grad from the University of Florida. Editing all articles on here while helping out the newbies. Love all things basketball.
@@MarcoJMartinez_
Previous Odell Beckham Reports to Camp and Finally Shows Browns’ Fans Why They Should Be Excited
Next NHL Stanley Cup Game 5: St Louis Takes 3-2 Series Lead Over Boston with Controversial Goal