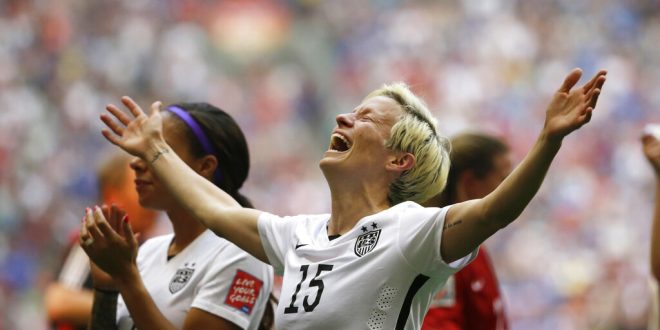 The final group of the 2019 FIFA Women’s World Cup will be in full effect on Tuesday, June 11th.

All five other groups have debuted their first match of the tournament. Now, USA, Thailand, Chile and Sweden are all that remain to get their taste of the 2019 FIFA World Cup in France.

Here’s the overview of the second match in Group F.

This is it. The Stars and Stripes will begin their journey to potentially win a consecutive World Cup title. The USWNT is one of the heavy favorites to win the entire tournament due to their unstoppable prowess during the World Cup qualifying in the CONCACAF. They scored 26 goals and won all five of their qualifying games to book their plane tickets to France and make it to their 8th World Cup in a row.

The U.S has never failed to reach it as far as the semi-finals when in the world cup. They’ve never even been ranked lower than 2nd in the entire world… EVER. Also, they lead all countries with most World Cup titles (3) and most goals in the tournament (112).

The defending champs look to take the trophy home for the second time in a row. Becoming the first U.S team to ever accomplish the task and the first overall team since Germany (2003, 2007).

The USWNT makes it tough to actually point out a specific player to pay attention to because of their positive team chemistry.

Head coach Jill Ellis typically runs a 4-3-3 formation that provides stability on all aspects of the field. You can manage a full-throttle attack through the middle with players like Julie Ertz. Ertz tends to initiate attacks off the Center-defensive midfielder position.

Or, Ellis might even stress the left or right flanks with the help of Lindsey Horan’s skill and finesse. Throw in Rose Lavelle’s speedy attributes in her first ever world cup from the right side and you have a solid midfield. When you have players like Alex Morgan, Tobin Heath, Carli Lloyd and Megan Rapinoe on your team then you might just be in soccer heaven.

The 29-year-old Morgan is considered to be one of the best forwards on the planet. She won the Golden Boot award at the CONCACAF Women’s Championship, scoring seven goals to help the U.S qualify for France 2019. Plus, she has over 100 goals in her national career, becoming the third youngest player and fourth fastest player to reach the milestone.

33-year-old Rapinoe is one of the leading members on the squad for the past decade. She scored three times in the qualifying rounds and loves to bring her skill and vision from the left wing.

On the right, Heath is a true fan favorite. The 31-year-old will play an integral role for head coach Ellis, providing crucial crosses to Morgan or Lloyd.

What’s surprising about this World Cup is seeing Carli Lloyd start from the bench.

The 36-year-old U.S legend doesn’t mind her new role due to the youthful talent on the team. However, she knows her super-sub role will also be crucial if the U.S ever finds themselves in a hole this World Cup. Plus, with her age, watching the pitch from the bench won’t be such a bad thing. She might learn a thing or two from coach Ellis to become a future manager herself.

To put into perspective, the USA hasn’t lost a game in the World Cup since 2011 when they lost to Japan to penalties in the final. In other words, USA is on a mission and won’t stop until they complete it.

Thailand is making their second appearance in the World Cup after making their debut at Canada 2015. Unfortunately for them, they face one of the greatest teams in recent history.

Head coach Nuengrutai Srathongvian, or coach Nueng, led them in that debut campaign. She retired for a while but will now return to the global stage. Coach Nueng says she’s not backing down from the difficult challenge at hand:

Thailand, or Chaba Kaew, finished third in their group in their World Cup debut behind Germany and Norway. They defeated Ivory Coast 3-2 in their final appearance group match, marking their first ever victory in the World Cup.

Now, they look to play in the biggest stage yet again against the biggest team and it doesn’t help that Thailand is coming into the tournament with no momentum whatsoever.

In the past 12 games dating back to August of 2018, they’ve only won one time. They’ve been outscored 31 goals to seven in those 11 losses.

Key Players to Watch for

Coach Nueng typically prefers running a 5-3-2 formation. Her defensive mindset of keeping a back line of five players can cause some trouble for the U.S., especially if they plan to park the bus early in the game.

Silawan Intamee, the 25-year old center-attacking midfielder identifies her role and helps on both sides of the ball as much as possible. Her vision to intercept opponents passes are crucial on defense and her speedy cuts can throw opponents off while they adjust on defense. She scored twice in the 2018 Asian Cup tournament to qualify her team to France 2019.

Orathai Srimanee was the hero back in 2015 when she scored twice to help Thailand beat Ivory Coast 3-2 in their final group match of the tournament. The 30-year-old is a strong attacker who’s usually deployed as winger or central midfielder who provides the drive and thrust that Thailand needs.

However, no player on the Thailand soccer squad will be more excited to play the U.S than Suchawadee Nildhamrong, or Miranda Nil.

The Cal University soccer player is only 21 years old and her idol is Alex Morgan, a Cal alumnus. She is a California native who nationalized herself through her father’s Thailand background.

The second game of Group F between USA and Thailand will kick off at 3 PM ET. This game will conclude the first round of group stage play.

Recent grad from the University of Florida. Editing all articles on here while helping out the newbies. Love all things basketball.
@@MarcoJMartinez_
Previous Can the Warriors Stay Alive in the NBA Finals?
Next FIFA WWC Group F: Chile vs. Sweden