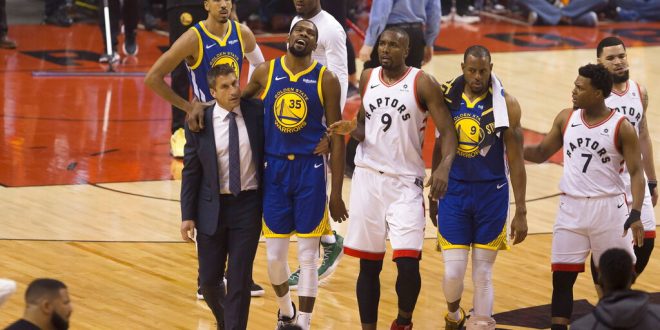 Golden State Warriors forward Kevin Durant (35) walks off the court after sustaining an injury as he is consoled by Toronto Raptors center Serge Ibaka (9) as Warriors forward Andre Iguodala (9) and guard Kyle Lowry (7) look on during first-half basketball action in Game 5 of the NBA Finals in Toronto, Monday, June 10, 2019. (Chris Young/The Canadian Press via AP)

Kevin Durant surprisingly returned to action during the NBA Finals series in Game 5 against the Raptors after battling injury.

Durant played for the first time since May 8th with a calf injury that sidelined him for 32 days. After a much anticipated return, Kevin Durant looked like he hadn’t missed a step.

He scored 11 points and helped the Warriors gain an early lead. He fought to keep their chance at a three-peat alive. During the second quarter, Durant suffered an Achilles injury that got quite the reaction. He will be undergoing an MRI today to determine if his Achilles is torn.

“I’m hurting deep in the soul right now I can’t lie but seeing my brothers get this win was like taking a shot of tequila, I got new life lol. #dubs”-KD

Rapper and songwriter Drake’s reaction went viral after Durant went down. Drake has been seen trolling the Warriors this whole series and is the celebrity face of the Raptors organization. The rap-star took to Instagram to put out a heart-felt message to the Warrior’s superstar.

“Was tough for any of us to even enjoy that game tonight after seeing this transpire. Praying for our brother. That’s my only concern tonight is your well being. “The game needs me” is an understatement when it comes to 35. Please wish the best for this true warrior.” -Drake

For ALL of you who question my son as a Man, question his Heart, question his Integrity and question his LOVE for the game of basketball, you DON’T know him. He has a heart of a true Warrior! This too shall pass. God Bless you ALL. pic.twitter.com/y0qcQ5Boga

Kevin Durant’s mom, Wanda Durant, sent a clear message to anyone questioning where his heart has been in this series. She reiterated that he wants to be competing alongside his teammates in this series.

Former Fab-five player and Get Up! ESPN analyst Jalen Rose believes that Durant shouldn’t have even played in Game 5. Lots of people are questioning the Warriors staff for allowing KD to play in game five.

“Everybody’s fake acting like they care about KD’s best interest when they don’t. It’s phony to me.” -Jalen Rose

I don’t believe KD should have played. @getupespn pic.twitter.com/r306SDvzCO

Warriors GM took the podium after the game to take the blame for the organization’s decision to play Durant in game 5. Lots of analyst are questioning the sincerity in his delivery and if he really had the best interest of KD.

Warriors GM Bob Myers was teary when he gave the news about Kevin Durant’s injured Achilles after Game 5. "I don't believe there's anybody to blame, but I understand in this world and if you have to, you can blame me," Myers said. https://t.co/1huGRZgk3x pic.twitter.com/P5gsTSYBrp

Game 6 of the NBA Finals series will take place on Thursday. We will see if the Warriors can force a Game 7 or if the Raptors will take home their first-ever NBA championship.