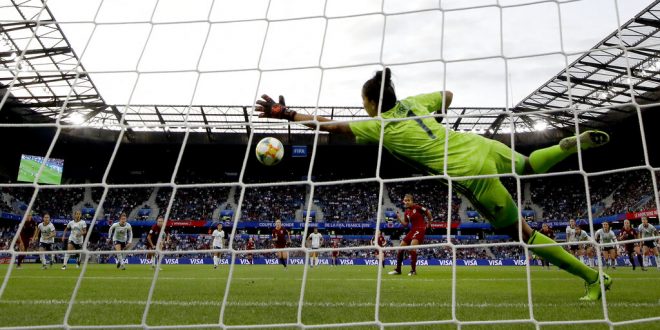 Heading into Matchday 2 of Group D, the qualifying spots for the knockout rounds were largely up for grabs. England led the group with three points via a win over Scotland, while Argentina and Japan sat tied in second with one point apiece. Scotland rounded out the group with no points.

The first match of the day was between Scotland and Japan. Scotland were coming off of a 2-1 defeat to England in Matchday 1. Japan finished their match against Argentina 0-0 in what would’ve felt like a loss to the Samurai Blue. This time, both teams were eager for all three points.

Japan made three changes to their starting lineup against Scotland. Mana Iwabuchi came in for Kumi Yokoyama at striker, Jun Endo replaced Yui Hasegawa at left mid, and Nana Ichise started over Moeka Minami in defense.

Scotland, on the other hand, opted for a change in formation. Against England, the Tartan Terriers deployed a 4-5-1 formation. This time, they went with a 4-4-2, presumably to give Erin Cuthbert some help up top.

Some notable changes to their starting lineup saw goal-scorer Claire Emslie start from the bench, as well as a change in full backs.

The difference between Japan’s play against Scotland and their play against Argentina was how direct they were. They still played their typical flowing style of play, but went direct when the occasion called for it.

It did not take long for Iwabuchi to make her presence known, as she scored the first goal of the game after 22 minutes.

Questions would have been asked for Japan’s coach Asako Takakura after she left Iwabuchi out of the starting 11 against Argentina. She affects the game in a major way when given the opportunity.

Another questionable penalty was awarded in this game. However, it came as the result of Japan playing a more direct style of play.

Sugasawa converts it herself after falling rather easily in the box, and it doubles the lead. Should it have been a PK? #FIFAWWC pic.twitter.com/A8MQXsBTZk

Yuika Sugasawa made the most of the contact between her and Rachel Corsie, and as a result, the referee awarded a penalty and cautioned Corsie.

Sugasawa stepped up to the spot and doubled Japan’s lead shortly before the end of the half.

Much like they did against England, the Scottish showed more fight in the second half. They finally got their breakthrough in the 88th minute from substitute Lana Clelland. Japan gave the ball away cheaply, and Clelland laced a beauty into the top-right corner.

Stats at the Whistle

Despite Scotland edging Japan in possession at 51 to 49 percent, the Japanese had more shots and shots on goal. Japan had 18 total shots to Scotland’s 12, with six on target to Scotland’s four.

The final match of the day was between the Lionesses of England and Las Albicelestes of Argentina. England had a relaxed 2-1 victory over Scotland in Matchday 1, while Argentina battled to keep things at 0-0 against Japan.

Argentina had made history by earning their first-ever point in their third World Cup against Japan. However, they wouldn’t set any new records against the Lionesses.

Argentina kept things very similar to their last starting lineup against Japan. The only change came with Adriana Sachs replacing Virginia Gomez at right back.

England Attack through Left Side

Beth Mead and Alex Greenwood caused several problems for the right side of the Argentine defense. Mead had several chances to beat her marker, but she often instead lost possession of the ball.

Argentina’s defense was broken in the 27th minute when Lioness captain Steph Houghton hit a long diagonal over to Mead. Mead then laid the ball off to Greenwood who was making a bursting run toward the end line. After she was beaten, Ruth Bravo tripped Greenwood, and the referee had no choice but to point to the spot.

Nikita Parris stepped up to take the penalty. She scored her first attempt against Scotland, but this time, Vanina Correa made a wonderful save to deny her.

Correa’s heroics wouldn’t end there. Throughout the match, she kept her side in it with a plethora of fantastic saves. One came later on in the first half against Mead.

Correa with ANOTHER great save!

She blocks Mead's shot and keeps the game scoreless in the first half. pic.twitter.com/Za2IAYIs34

After resilient defending and goalkeeping from Argentina, they lost their heads a bit in the 61st minute. After winning the ball, Argentina looked to break on the counter. However, they committed far too many bodies forward and paid for it. England swiftly countered after winning the ball. Finally, the ball fell to Mead, who laid it across for Taylor to finish at the back post.

Despite their dominance in the game, England failed to put away several good chances in this one. Jill Scott had several wide open headers that she failed to put on target.

Sure, Correa made some great saves, but many of England’s shots were too close to the keeper. The Lionesses will need to improve their finishing if they wish to make a deep run in the tournament.

England held the majority of the ball with 64 percent possession over Argentina’s 36 percent. England also dominated Las Albicelestes in attempts, with 19 total shots and seven on target compared to Argentina’s three attempts and two on target.

With their back-to-back victories, England have secured their spot in the next round of play with one game remaining.

Group D action will continue on Wednesday, June 19. Japan will face England, and Argentina will face Scotland. Both matches will kick off at 3 p.m. ET.