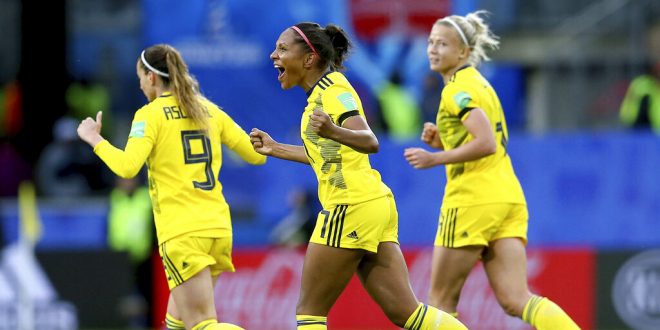 Matchday 2 is among us in Group F of the FIFA Women’s World Cup. Chile has a tough battle against the reigning world champs, the US, who so happened to score a record 13 goals in their first match of the tournament against Thailand. On the other hand, European powerhouse Sweden look to continue their dominance when they face last-place Thailand.

The win against Chile was crucial for Sweden. They started off slow but the weather delay helped them out. It killed all of Chile’s defensive momentum and Sweden took advantage.

Kosovare Asslani’s goal was as easy as you can wish it to be. The ball was bouncing around in the penalty box for what seemed like an eternity due to Cile’s incapability to clear it from the box, and Asslani boomed it into the back of the net. Then, Madelen Janogy came through and offered a classy finish with insane dribbling moves in injury time to seal the match for Sweden.

Stina Blackstenius is a phenomenal forward for Sweden also, she provides great ball control and positions herself well in the attacking third. She realizes her oppositions tactics and can adjust fairly well from either the false 9 positions or even fair off into either flank if needed. She’s great at shooting with her head and almost had a screamer against Chile but missed just wide from the mark.

Left-back Sofia Jakobsson is going to be a nightmare for Thailand. Her ability to play all over the field is frightening for oppositions. She assists in attacking and doesn’t let anyone get by her when on defense. Plus, her leg is a precise canon when placed on corner and free kicks. A natural set-piece specialist.

13-0 is a bad loss, there’s nothing more to say about it. Thailand is looking for revenge and they’ll have a tough opponent once again to confront. Thailand will try and redeem themselves with the likes of Kanjana Sungngoen, Miranda Nild and Silawan Intamee as their best-attacking options.

Obviously, their biggest let down was their defense. But, giving up 13 goals once again is a long shot.

However, goalkeeper Sukanya Chor Charoenying will have to redeem herself if she wants to let her team have a shot at advancing to the next round.

Sweden will show no mercy against a weak Thailand team.

Listen to our FIFA Women’s World Cup podcast for more info below.

Recent grad from the University of Florida. Editing all articles on here while helping out the newbies. Love all things basketball.
@@MarcoJMartinez_
Previous Group D Matchday 2 Recap: Japan Dominant Against Scotland, and Argentina Fall Prey to Lionesses
Next Matchday 2 for Group F: USA vs. Chile