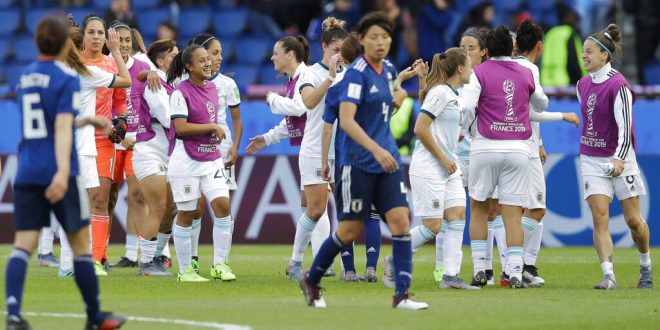 Argentina players congratulate each others at the end of the Women's World Cup Group D soccer match between Argentina and Japan at the Parc des Princes in Paris, Monday, June 10, 2019. The match ended in a 0-0 draw. (AP Photo/Alessandra Tarantino)

Matchday 2 for Group D: Scotland Versus Japan and England Versus Argentina

In case you missed it, here’s a quick rundown of what happened on Matchday 1.

England came into this one as the heavy favorites. Thanks to a VAR-awarded penalty early on, England took the lead through Nikita Parris in her first World Cup match for the Lionesses. Later on in the half, striker Ellen White doubled England’s lead.

Scotland managed to pull one back late in the game through Claire Emslie to score their first-ever goal at a World Cup. However, it was too little, too late.

Scotland struggled in this one, especially in the first 45. They were unable to get the ball to their key players, Kim Little and Erin Cuthbert.

In the second half, the majority of Scotland’s counters came through Emslie on the right. However, she was often isolated and unable to trouble Alex Greenwood at left back.

For a comprehensive rundown of the match, click here.

Japan dominated the South American side for a majority of the game. The Samurai Blue relentlessly pushed forward, looking to combine in and around the box. Despite a large amount of possession, the Japanese were unable to create many clear opportunities.

One clear chance to score fell to winger Yui Hasegawa, but her effort sailed harmlessly over the crossbar.

Argentina sat back and defended resolutely. The likes of Agustina Barroso and Eliana Stabile had standout performances in defense. Whenever Argentina had a chance to break, they looked to their captain, Estefania Banini, to make something happen on the left side of the midfield. She won man of the match for her efforts in this one.

Scotland and Japan will debut Matchday 2 of Group D. As a result of their loss against England, Scotland comes into this one at the bottom of the table. Japan is tied for second after its 1-1 draw to Argentina.

What to Expect from Scotland

Once again the underdogs here, look for Scotland to come out of the gate swinging, much like they did against England. In the first 10 minutes of the game, Scotland looked the more dominant side, right up to the penalty decision. After that, they struggled to hold the ball.

As long as they don’t suffer an early disadvantage once again, Scotland should look to attack their opponents. The Japanese defense hasn’t been tested much this World Cup, so perhaps they may still be adjusting to the pace of the games.

What Scotland must do differently in this game is to get the ball to their impact players. Little and Cuthbert didn’t get nearly enough touches in dangerous positions to make much of a difference against England. This time, rather than focusing the attack on the right with Emslie, Scotland should look to move the ball around more.

What to Expect from Japan

While possession is great, it won’t win a team the game. Japan found that out against Argentina. They held 61 percent of the ball, but only mustered a total of three shots on goal.

Oddly enough, Japan’s coach, Asako Takakura-Takemoto, left Mana Iwabuchi out of her starting 11. Surely she won’t choose to do that again.

Hasegawa looked sharp for Japan early on against Argentina. She possesses flair and skill with the ball at her feet. However, as the game wore on, Hasegawa faded from it. Takakura should urge Hasegawa to be more aggressive against Scotland, as she certainly has the ability to impact the game in a big way.

In the afternoon, after Jamaica vs Italy, England and Argentina will wrap up Matchday 2 for Group D. England are the lone leaders in the group so far with three points, while Argentina sit tied with Japan in second with one point.

What to Expect from England

England are going to have a lot of the ball in this one. It is up to their playmakers to break down the determined Argentine defense; something Japan could not manage.

If Parris and Lucy Bronze are allowed to combine down the right-hand side of the field like they could early against Scotland, it could be a long day for Las Albicelestes. Bronze is a fantastic, well-rounded full back who has the ability to punish any defense with her delivery. As long as White can stay on side, which she struggled to do in the first game, she could be in for a field day.

What to Expect from Argentina

While Las Albicelestes were overjoyed to receive their first-ever point in a World Cup against Japan in Matchday 1, they won’t be content with just that. Argentina has made it clear that it intends to make the knockout rounds.

Argentina will more-than-likely line up in a similar system as they did against Japan; a 4-5-1, where they overload the defense with their midfielders dropping deep, then look to counter through their wide midfielders.

While this worked in the first match, Argentina will need to possess more of a threat in the attack. They managed just one shot on target against Japan; one that was easily saved. This time around, they’ll need to put the ball in the air for their 6-foot forward Sole Jaimes to attack.

Their attack needs to improve, because they will probably not manage another clean sheet in the tournament.

Scotland and Japan will kick off Matchday 2 for Group D at 9 a.m., followed by Argentina and England at 3 p.m.

For more information about the tournament, visit fifa.com.