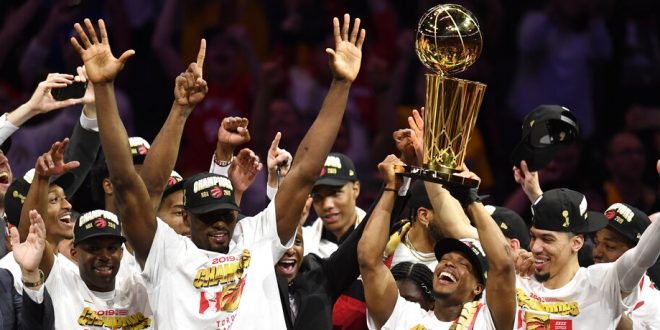 A back and forth series between the Toronto Raptors and Golden State Warriors has finally come to a close and a new NBA Champion has been crowned. The Raptors beat the Warriors 114-110 last night in Game 6 of the 2019 NBA Finals at Oracle Arena.

It wasn’t a blowout. It wasn’t over after the first 10 minutes. Game 6 was competitive and both Toronto and Golden State came with the attitude to win. Ultimately, Toronto had an edge on Golden State and was able to knock off the two-time defending NBA Champions.

Following the win, Leonard was named the 2019 NBA Finals MVP. He also won the award back in 2014 with the San Antonio Spurs. This makes him the first NBA player to win the award in both the Eastern and Western conferences. Although Leonard had somewhat of a quiet Game 6, he has been nearly unstoppable on the offensive side throughout the Raptors post-season.

He has led his team in points, rebounds, steals and player efficiency rating. One of Leonard’s most impressive performances occurred in Game 4. He shot 11-of-22 from the field and accounted for 36 of the Raptors’ points.

There’s no doubt that Leonard was one of the reasons Toronto was able to get a win in Game 4 and lead the series 3-1. Last night Leonard put up 22 points, yet proved to be a crucial element for the Raptors in the final seconds of the game. Leonard sealed the win for Toronto with three free throws in the last second of the game. Leonard concluded his 2019 season not only as an NBA Champion but also with the third-most points ever scored in a postseason. Only Michael Jordan and Lebron James have scored more.

Arguably Golden State’s best player, Klay Thompson, was ruled out of the game after a third-quarter horrific fall. It was later announced that Thompson tore his ACL. He accounted for 30 of the Warrior’s points last night.

Maddie Schmidt's goal is to become a college football reporter. Be sure to check out her sports blog, mygamedaygal.com.
@@maddieschmidt15
Previous Matchday 2 for Group D: Scotland Versus Japan and England Versus Argentina
Next 2019 NCAA Men’s College World Series Begins Tomorrow