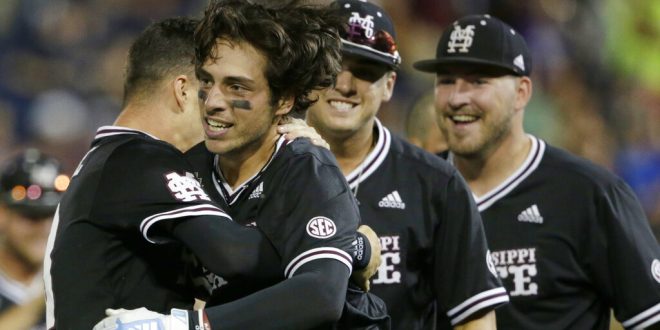 Mississippi State's Marshall Gilbert, second from left, is hugged by teammates after he drove in the winning run against Auburn in the ninth inning of an NCAA College World Series baseball game in Omaha, Neb., Sunday, June 16, 2019. Mississippi State won 5-4. (AP Photo/Nati Harnik)

Mississippi State Scores 4 in the 9th to Beat Auburn

The Mississippi State Bulldogs did it again. With their backs against the wall in the bottom of the ninth, they came back to beat Auburn 5-4.

After trailing 7 out of the 9 innings and going into the 9th inning with Auburn up 4-1, the Bulldogs rallied a hard-fought win.

The ninth inning comeback began with a leadoff double from Mangum. This was followed by a strikeout and then Allen getting walked.

With two outs on the board, Skelton grounded to third and Auburn’s overthrow to first base allowed MacNamee to score and even things up 4-4.

Martin hit a lead-off home run in the bottom of the first inning and a two-run shot in the 7th so carry the Commodores to a win. The All-American became the first-ever Vanderbilt player in history to score two home runs in a College World Series game.

Vanderbilt starter Drake Fellows also had a superb performance. He allowed one run on seven hits, struck out six and walked one in seven innings.

Vanderbilt advanced to the semifinals to face off with Mississippi State in a best of three-game series. Game 1 of the series takes place tomorrow at 7 p.m.

The Michigan vs Florida State series starts tonight at 7 p.m. The winner of both these series will move onto the College World Series Finals.