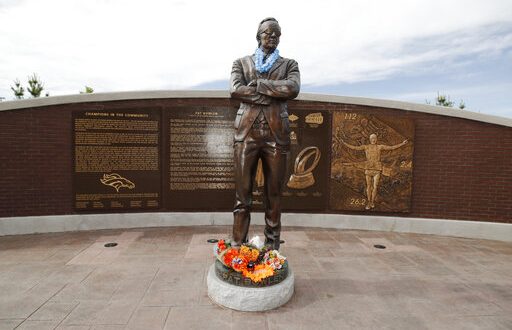 Bouquets of flowers cover the base of a statue of Denver Broncos owner Pat Bowlen outside Mile High Stadium, the home of the franchise, Friday, June 14, 2019, in Denver. Bowlen died Thursday. (AP Photo/David Zalubowski)

The Denver Broncos and NFL community lost one of the great executives in the league, Pat Bowlen. Bowlen passed away on June 13 at the age of 75 in Denver after battling Alzheimer’s for many years. He was the owner of the Broncos from 1984 to 2018. During that time, the Broncos appeared in seven Super Bowls and won three of them.

In 35 years as the Broncos’ owner, Bowlen has experienced all the highs and lows when running an NFL organization. Bowlen, or Mr.B to many, has been viewed as more than an owner. He cared about his players and winning. His care and compassion for his players have translated into being viewed as a father figure on and off the field.

I just woke up to the the very sad news of my friend & confidant Mr.B passing away.The world has lost a great man/legend.My heart & prayers to the Bowlen family.
Mr.B, I’ll never forget the impact you had on my life.I can’t thank you enough. Rest In Peace, TD#patbowlen #broncos pic.twitter.com/93x25GFOcr

Throughout the 35 year journey as the Broncos owner, Bowlen had many great players play for Denver. One player that stands out among the rest is Hall of Fame quarterback John Elway. Elway played his whole 16-year career in a Broncos uniform.

Elway was already a member of the Broncos for one season before Bowlen took over the organization. Throughout the years Bowlen and Elway formed a unique relationship between owner and player because they both had one thing in mind: winning.

The first few years of Bowlen’s tenure and Elway’s career was tough. From 1984 to 1986 the Broncos appeared in three Super Bowls and lost all three. All that heartbreak would finally come to an end when Elway led Denver to back-to-back Super Bowl wins in 1997 and 1998. It was the last two years of Elway’s career and both men were finally able to hoist the Lombardi Trophy to cement each of their legacies.

After Elway’s playing career, his relationship with Bowlen continued. Elway was hired in 2011 to be Director of Player Personel. His role increased with the team when Bowlen appointed Elway to be the General Manager the following season which is the position he still holds today.

As the GM, Elway brought the Broncos back to winning form. It reminded many fans of what Elway and Bowlen were capable of doing as a tandem in the late ’90s. Only this time Elway wasn’t in the pocket but in the front office.

With Bowlen and Elway working together in the front office, they were able to once again hoist up the Lombardi Trophy in 2015 in Super Bowl 50. When Elway held the trophy and raised it in the air he simply said, “This one’s for Pat.”

Previous Are the Houston Rockets Blowing Up?
Next Former Gator Pete Alonso Coming Through for the Mets